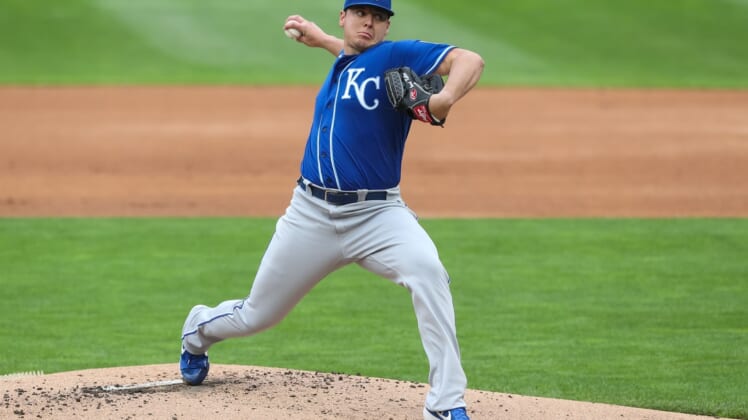 Whit Merrifield had two hits, scored twice and drove in a run as the Kansas City Royals defeated the Minnesota Twins 6-3 on Sunday afternoon in the finale of a three-game series.

The Royals defeated the Twins twice on the weekend for their first series victory at Minnesota since Sept. 1-3, 2017.

The Royals won despite walking seven Twins batters and hitting another, as Minnesota stranded 10 baserunners.

Royals right-hander Brad Keller (5-4) allowed three runs on five hits with four walks and six strikeouts to pick up the victory, while working his way out of multiple jams. Greg Holland pitched the ninth inning for his third save.

Merrifield opened the game with a double and went to third on a Carlos Santana groundout. Andrew Benintendi then looped the first pitch he saw over shortstop for a single, scoring Merrifield.

The Twins tied it in the bottom of the first. They loaded the bases on a single and two walks. With two outs, Trevor Larnach walked to tie it 1-1. Keller struck out Rob Refsnyder to end the inning.

The Twins’ Ben Rortvedt hit his first major-league home run leading off the second inning as Minnesota took a 2-1 lead. Rortvedt was recalled from Triple-A St. Paul prior to Sunday’s game, replacing Max Kepler, who was put on the 10-day injured list.

Shoemaker went on to retire 11 consecutive batters, striking out five in the first four innings, but all that ended in the fifth. Edward Olivares, who was recalled from Triple-A Omaha prior to the game, delivered his first hit of the season and went to third on a single by Kelvin Gutierrez.

Hunter Dozier drove in Olivares on a fielder’s choice and scored two batters later on a Merrifield single. With the bases loaded and one out, Benintendi drove in a run with a sacrifice fly and Salvador Perez singled in the fourth run of the inning for a 5-2 lead.

The Twins loaded the bases with no outs in the bottom of the fifth on a pair of hits and a walk, but they only managed one run on Miguel Sano’s double-play grounder.

Dozier’s homer in the ninth, his sixth of the season, gave the Royals a three-run cushion.