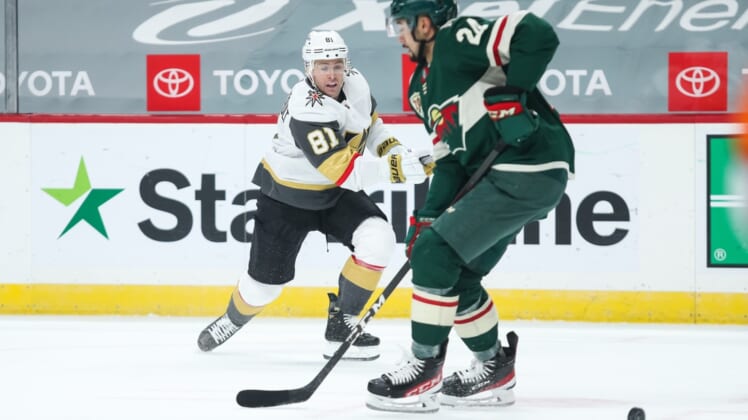 Kevin Fiala and Jonas Brodin scored goals for Minnesota, which was playing just its third home game since Jan. 31 because of a two-week COVID-19 pause combined with a road-heavy schedule.

The 24-year-old Kahkonen improved to 10-4-0 on the season while improving his personal winning streak to seven games.

Minnesota, swept in a back-to-back by the Golden Knights last week in Las Vegas, took a 1-0 lead midway through the first period on Fiala’s eighth goal of the season.

The score came after a turnover by Vegas forward Keegan Kolesar in his own end. Fiala then broke out on the right wing on a 2-on-1 with Zach Parise, and then cut inside into the slot and fired a snap shot over Fleury’s blocker for what would prove to be his third game-winning goal of the season.

Vegas managed just five shots in the first period and didn’t really test Kahkonen until the second period when, thanks to a pair of power plays, it outshot the Wild, 14-5. Chandler Stephenson had the best chance to tie it for the Golden Knights midway through the period, but his shot from the left circle through traffic bounced off the top of the left post.

Fiala had a chance to seal it when he stole the puck from Nic Hague and broke in on a breakaway with 2:22 to go, but his shot went wide.

The Golden Knights pulled Fleury for an extra attacker with 1:45 left, and Brodin was awarded a goal with six seconds to go after getting slashed by Jonathan Marchessault near the crease during an empty net attempt.