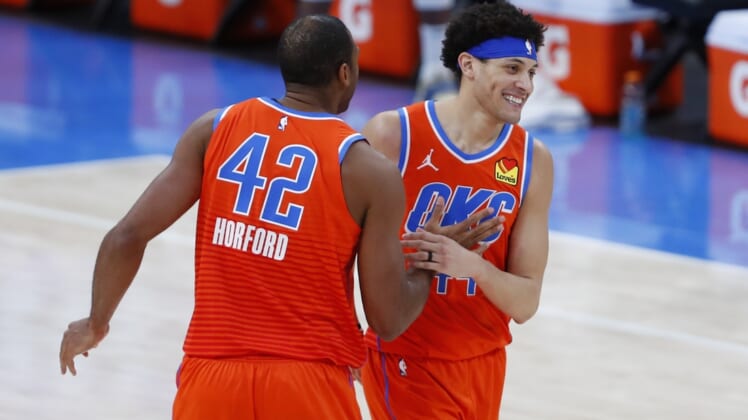 Justin Jackson had a season-high 22 points to lead the Oklahoma City Thunder to a 114-109 win over the Milwaukee Bucks on Sunday night in Oklahoma City.

Jackson hit all four of his 3-point attempt, including one from the top of the key with 14 seconds left to put the Thunder ahead by five and all but put the game away.

Jackson didn’t play much early in the season but with Oklahoma City being shorthanded recently, his role has grown. He’s combined for 42 points over the past two games.

Darius Bazley assisted on the final Jackson 3-pointer for the 32nd assist by the Thunder, helping Oklahoma City snap a three-game losing streak.

Hamidou Diallo had a career-high 13 rebounds.

The Thunder led for much of the middle two quarters before Milwaukee made its push.

Oklahoma City led by 11 with more than seven minutes left in the third before the Bucks closed the quarter with a 23-12 run to force a tie heading into the fourth.

Bryn Forbes and Portis led the way for Milwaukee in the quarter, combining for 22 points – 12 by Forbes.

The Bucks jumped ahead early, leading 13-3 just more than four minutes in, and looked to bury Oklahoma City quickly.

But after a cold start from the field, making just 1 of 7 to start the game, Oklahoma City made six of its next eight shots to reel off a 14-0 run and take their first lead of the game.

While the Thunder got hot from the floor, Milwaukee went the other way.

In scoring just 41 points before halftime, the Bucks were just 3 of 18 from behind the 3-point line.

Milwaukee hadn’t scored fewer than 45 first-half points in any game this season.