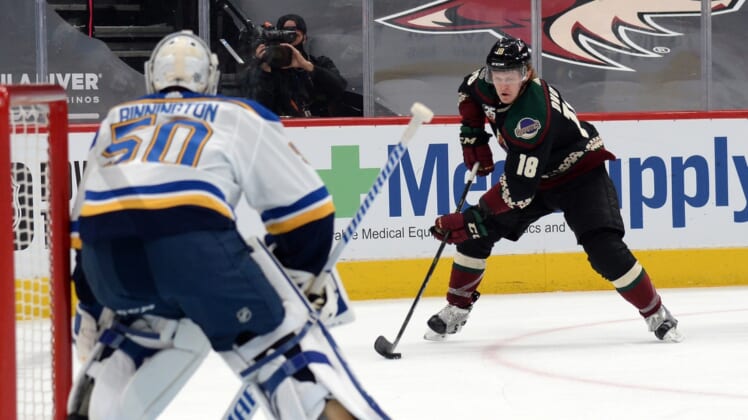 Johan Larsson scored for the Coyotes, and Darcy Kuemper made 23 saves.

This was the fourth game in a seven-game series of games between the Coyotes and Blues due to COVID-19 postponements elsewhere. Arizona won the previous three games in St. Louis.

This was also the opener in an 11-game homestand for the Coyotes.

After going 1-for-17 on the power play in their previous four games, the Blues converted their first opportunity in this one. Faulk’s blast from the center point, set up by David Perron’s pass, put the Blues ahead just 2:28 into the game.

Ryan O’Reilly nearly put the Blues up 2-0 late in the period, but a replay review determined his shot went under the net with the goal elevated from its mooring.

Larsson tied the 1-1 by jamming a rebound through Binnington 8:44 into the second period.

Conor Garland beat Binnington with a snap shot from the right circle late in the period, but the Blues erased that go-ahead goal with a successful offside challenge.

Faulk put the Blues up 2-1 with 6:35 left on an opportunity created by Jordan Kyrou. Kyrou won the race for the puck to negate an icing call, then came out of the right corner with the puck and doubled back toward the net to feed Faulk breaking to the slot.

Barbashev and Schenn scored empty-net goals to ice the victory.

The Coyotes got captain Oliver Ekman-Larsson back after a 10-game absence. Forward Christian Fischer also returned after missing four games with an undisclosed injury.

Blues forward Oskar Sundqvist had to be helped off the ice with 3:48 left after crashing awkwardly into the boards.