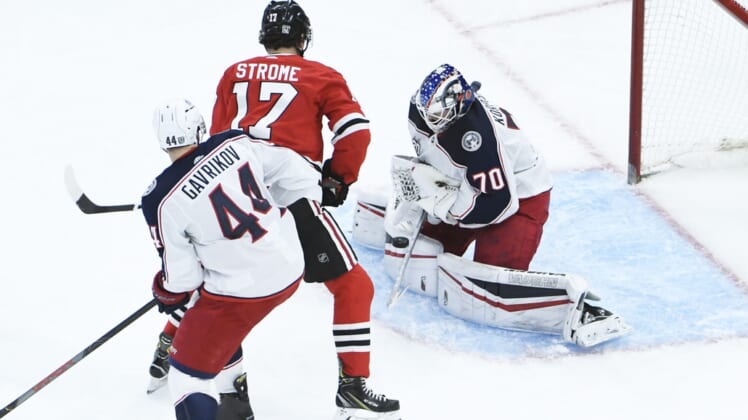 Oliver Bjorkstrand collected one goal and one assist while Joonas Korpisalo sparkled in net as the visiting Columbus Blue Jackets claimed a 2-1 victory over the Chicago Blackhawks in the lone NHL game Friday night.

Eric Robinson also scored for the Blue Jackets, who received a 31-save outing from Korpisalo en route to their second consecutive win. Possibly Korpisalo’s biggest save came against Patrick Kane with three minutes remaining.

Columbus, which is on a 4-0-3 run, will meet the Blackhawks again in Chicago on Sunday.

Dylan Strome scored for the Blackhawks, and Kevin Lankinen made 25 saves.

Bjorkstrand opened the scoring with a power-play tally 8:53 into the first period. While the Blue Jackets worked the puck around the offensive zone, Cam Atkinson spied Bjorkstrand alone at the left faceoff dot and feathered a perfect pass that was blasted into the top shelf for Bjorkstrand’s third goal of the season.

Robinson doubled the Columbus edge at 3:39 of the second period. Sprung for a breakaway by Bjorkstrand, Robinson sped down the wing before ripping a top-corner, glove-side wrist shot into the net for his second goal of the season.

With the Blackhawks needing a surge of life, Strome provided it with a power-play goal just past the midway point of the second period. The hosts were buzzing all around the zone generating chances and were finally rewarded when Strome found the mark from the slot for his third goal of the campaign.

Columbus also received some good news off the ice. Patrik Laine, the sniper acquired on Jan. 23 in a trade with the Winnipeg Jets, finally received his visa and arrived in Columbus on Friday. After a 48-hour quarantine, Laine is expected to suit up on Tuesday when the Blue Jackets play host to the Dallas Stars.

Lankinen made several stops to keep his club in the hunt. The rebuilding and short-handed Blackhawks — who have a handful of key offensive players out of action due to injury or illness — have won only two of nine games to start the season.