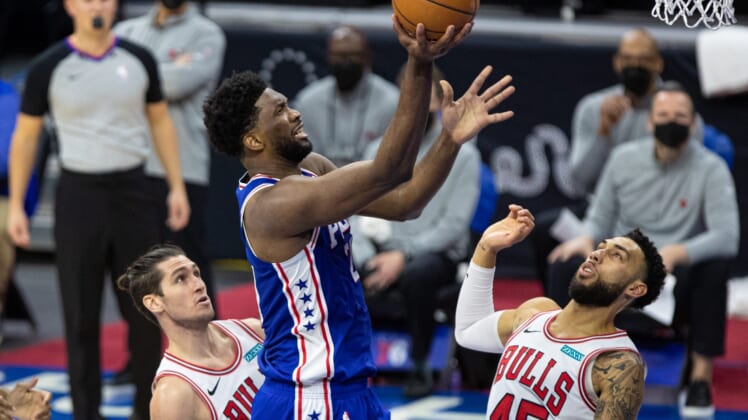 Joel Embiid scored a career-high 50 points to go along with 17 rebounds, five assists and four blocked shots Friday night to lift the host Philadelphia 76ers past the Chicago Bulls 112-105.

It was Philadelphia’s second win in succession without Ben Simmons, who sat with a stomach illness.

After the 76ers led throughout the first quarter, the Bulls gained the lead, only to have Philadelphia surge behind Embiid’s 25 points, and the Sixers led at the half, 58-53.

Carter, who hit his first four shots, kept the Bulls close with 15 first-half points on 7-for-9 shooting. The Bulls missed 11 of 13 shots from beyond the arc in the opening half yet trailed by only five.

Less than three minutes into the third quarter, Embiid converted a three-point play for a 63-53 Philadelphia advantage. Still, LaVine hit a deep 3-pointer from the wing and the Bulls closed to 68-66.

Howard’s late dunk pushed the Sixers to an 85-79 lead entering the fourth quarter.

The Bulls kept coming, as Arcidiacono’s three-point play with 8:31 left capped an 8-0 Chicago run for an 89-87 Bills advantage.

Embiid scored the next seven points to put the Sixers ahead by five.

Two more free throws and a tough corner jumper by Embiid extended the advantage to 109-103 with 41.3 seconds left, and the Sixers held on.