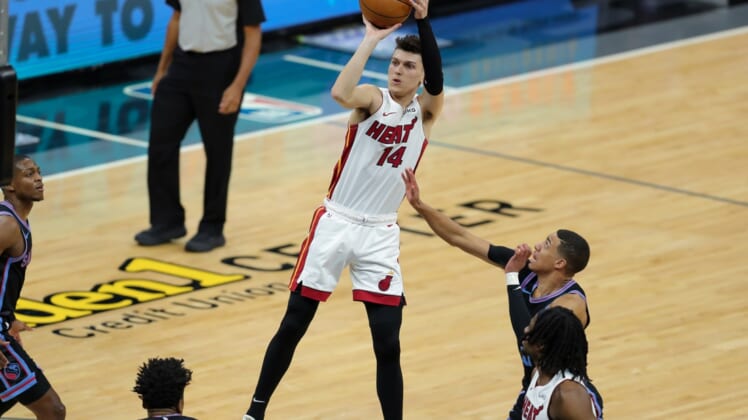 Tyler Herro scored 27 points, Kelly Olynyk had a season-best 22 points and Duncan Robinson added 20 as the visiting Miami Heat registered a 118-110 victory over the slumping Sacramento Kings on Thursday night.

Jimmy Butler recorded 13 points, 13 assists and 10 rebounds to become the first player in Heat history with three consecutive triple-doubles. He had become the first Miami player with two straight one night earlier against the Golden State Warriors.

Bam Adebayo also had a triple-double with 16 points, 12 rebounds and 10 assists as the Heat halted a three-game losing streak. Kendrick Nunn added 16 points for Miami.

Nemanja Bjelica scored a season-high 25 points and also collected eight rebounds for the Kings, who lost their season-worst fifth straight game to conclude a winless homestand of the same length. Marvin Bagley III added 19 points and 10 rebounds, and DaQuan Jeffries went 5-for-5 from 3-point range while scoring a career-best 17 points.

It was the second straight game in which the Heat never trailed in regulation. One night earlier, Miami led by 14 with 6:40 left in the fourth quarter before collapsing and eventually losing 120-112 in overtime to the Warriors.

The Heat led 57-43 at halftime and increased the lead over the first four-plus minutes of the third quarter. The advantage topped out at 74-51 after Nunn knocked down a 3-pointer with 7:54 remaining in the stanza.

The Kings made a strong run and Bagley scored the final five points of the period to cut the Heat’s advantage to 89-79.

Sacramento crept within 14 points before the Heat scored six straight. The burst was capped by Andre Iguodala’s dunk, which gave Miami a 111-91 lead with 4:50 left.

The Kings later narrowed the gap by scoring the game’s final eight points.

Miami scored the first eight points of the game en route to holding a 14-point lead at the break. Herro had 14 first-half points for the Heat while Bjelica had 13 for the Kings.