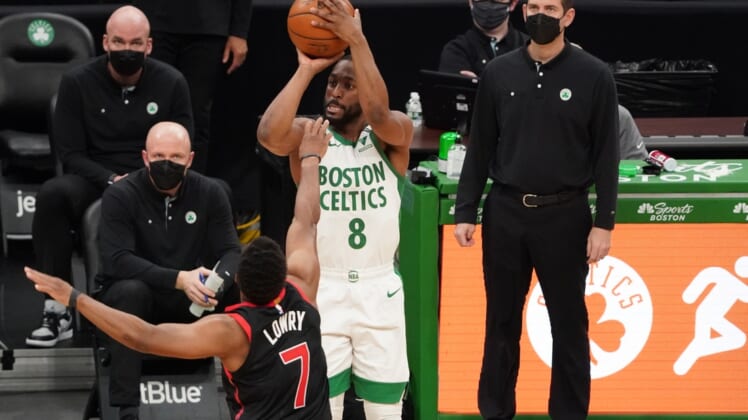 Jayson Tatum had 27 points and 12 rebounds, Jaylen Brown scored 20 of his 21 points in the second half and the host Boston Celtics downed the short-handed Toronto Raptors 132-125 Thursday night.

Grant Williams added a season-high 17 points off the bench, and Kemba Walker scored 15 for the Celtics, who extended their winning streak to four.

Chris Boucher scored a career-high 30 points, Norman Powell 25 and Terence Davis 22 as the Raptors lost for the second straight night. Kyle Lowry had 14 points and a career-high 19 assists.

Toronto played once again without three starters – Pascal Siakam, Fred VanVleet and OG Anunoby – and reserves Malachi Flynn and Patrick McCaw due to health and safety protocols. Head coach Nick Nurse and members of his staff were also unavailable.

Still, the Raptors were within three, 122-119, on a pair of Boucher free throws with 2:45 left. Back-to-back buckets from Tatum and Jeff Teague helped restore the Celtics’ advantage to eight, and Boston withstood threes from Stanley Johnson and Boucher down the stretch to secure the victory.

The Raptors began the third with a four-point lead, but Brown brought the Celtics back by scoring all the team’s points during a 9-3 run for an 80-77 advantage at 7:59. Boston stretched its lead to double digits, 99-89, on a Williams 3-pointer and entered the fourth up 101-92.

The Raptors’ largest lead came 56-47 in the second quarter on a Powell 3-pointer. Three free throws and a 3-pointer from Walker helped the Celtics quickly get back within one, but it wasn’t until 48.5 seconds remained that Boston went ahead, 66-65, on a Tatum dunk. Toronto closed the period on a 5-0 run for a 70-66 advantage at the break.

Powell paced all scorers with 21 points.