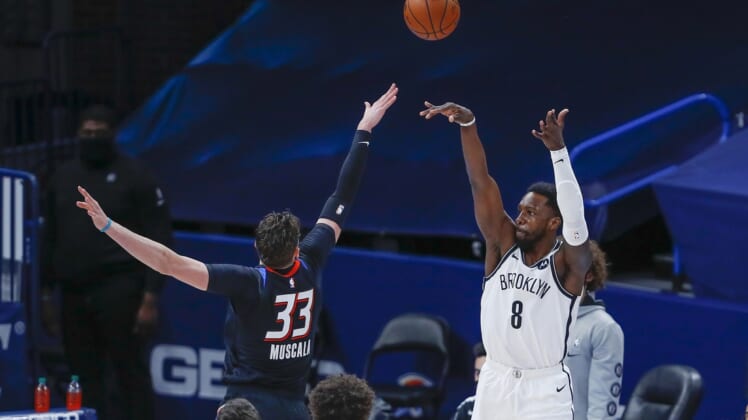 James Harden had 25 points, 10 rebounds and 11 assists to help the visiting Brooklyn Nets to a 147-125 win over the Oklahoma City Thunder on Friday night.

It was Harden’s third triple-double in eight games since being traded from Houston.

The win, Brooklyn’s highest-scoring of the season, was the first for the Nets over the Thunder since Dec. 7, 2017 and their first win in Oklahoma City since 2014.

Brooklyn got rolling offensively early, attacking the basket from the start and making it tough for the Thunder to do the same.

The Nets outscored the Thunder 22-2 in the paint in the first quarter and eventually scored 70 in the paint.

Brooklyn led by as many as 24 points in the first half and by 17 at the break.

The Nets’ 76 first-half points were their second-highest scoring first half since moving to Brooklyn nine seasons ago, behind only 81 in April 2017 against Philadelphia.

The Nets were without Kevin Durant for the sixth time this season as Durant continues to work his way back from the Achilles injury that kept him out all of last season.

In the second half, the Thunder twice made runs to get back in the game but each time, the Nets extended the lead back out.

Harden got Brooklyn going again with six quick points to start a 12-2 run and the Thunder went more than four minutes without a field goal as the Nets put the game away for good.

The Nets have won four consecutive and eight of their last 10.

Oklahoma City dropped to 1-6 at home this season.

Kyrie Irving also had 25 points as Brooklyn had nine players in double figures.

Rookie Theo Maledon, starting for the third consecutive game with George Hill, who remaining out with a right thumb strain, had the best game of his young career.

Maledon had 24 points, going 8 of 9 from the field and hitting a season-high six 3-pointers. Maledon’s previous career high was 12 points.