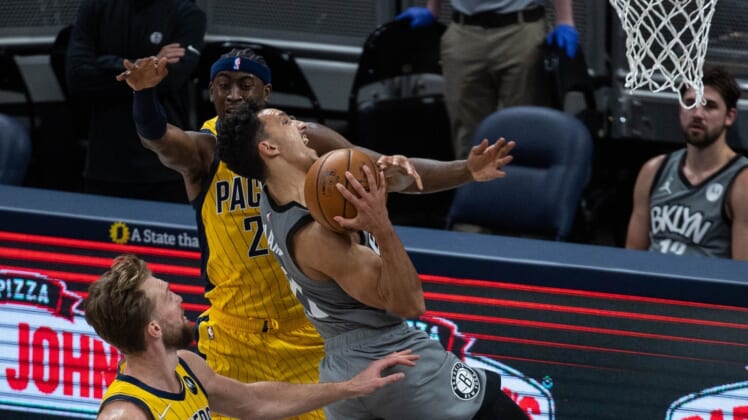 James Harden totaled 40 points, 15 assists and 10 rebounds as the Brooklyn Nets rallied in the fourth quarter and continued their surge with a 124-115 victory over the host Indiana Pacers on Wednesday night.

Brooklyn won its sixth straight game, extended its franchise-record road winning streak to eight games and beat Indiana for the second time in its 14-1 tear since Feb. 9. The Nets overcame a 16-point, second-quarter deficit and chipped away at it before surging ahead in the final 12 minutes.

Harden produced his first 40-point game with the Nets and his 11th triple-double — one shy of Jason Kidd’s single-season franchise record (2006-07). He made 13 of 27 shots and got his latest triple-double by rebounding a missed a 3-pointer by former Net Caris LeVert with 1.6 seconds left.

Harden also produced the second 40-point triple-double in franchise history. The other was Vince Carter (46 points, 16 rebounds and 10 assists) on April 7, 2007 against the Washington Wizards.

The Nets outscored Indiana 35-24 in the fourth quarter and took their first lead since midway through the first when Harden connected with Nicolas Claxton for a dunk that made it 98-96 with 8:56 remaining. Brooklyn then took the lead for good when Jeff Green snapped a 98-98 tie by hitting two free throws with 8:02 left and took a 115-106 lead when Harden connected with Claxton for an alley-oop with 72 seconds left.

Joe Harris added 19 for the Nets, who sat Kyrie Irving (groin) for precautionary reasons and shot 48.3 percent, including 9 of 27 from 3-point range. Green and Tyler Johnson chipped in 15 apiece for Brooklyn.

Malcolm Brogdon scored 24 points for the Pacers, who lost for the seventh time in nine games and dropped their sixth straight home game. LeVert added 19 in his home debut while Domantas Sabonis totaled 18, 11 rebounds and 11 assists for his 10th career triple-double.

Sabonis scored 10 points when the Pacers outscored Brooklyn 19-6 over the final 3:48 for a 40-25 lead after the opening quarter. Brooklyn clawed back throughout the second quarter and was within 61-58 by halftime after Harden missed a tightly-contested 3-point try right before the buzzer.

Indiana held three eight-point leads in the third and settled for a 91-89 lead entering the fourth when Harris drained a 3-pointer with 3.9 seconds left.