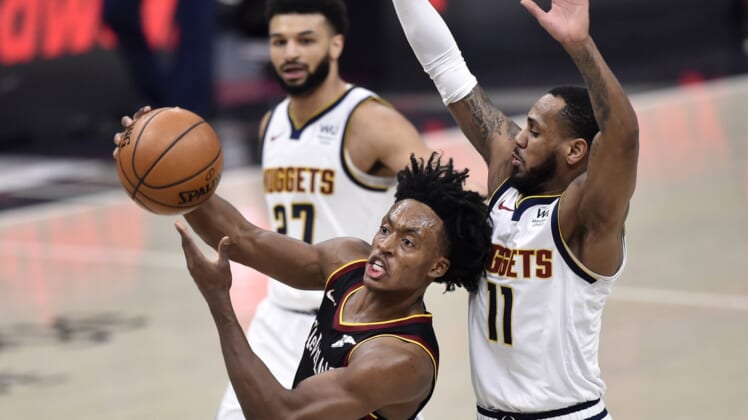 Jamal Murray scored a career-high 50 points Friday night to lift the visiting Denver Nuggets to a 120-103 victory over the reeling Cleveland Cavaliers.

Murray sank 21 of 25 shots — including 8 of 10 from 3-point range — for the Nuggets, who shot a sizzling 66.7 percent from the floor to claim a 69-50 lead at intermission. Denver didn’t cool off much, finishing with 57.5-percent shooting to defeat Cleveland for the second time in 10 days.

Murray’s point total eclipsed his previous regular-season career high of 48 points, set in the Nuggets’ 115-107 win over the Boston Celtics on Nov. 5, 2018. He did score 50 in two playoff games against the Utah Jazz last season.

Michael Porter Jr. scored 21 of his 22 points in the first half and Nikola Jokic celebrated his 26th birthday by collecting 16 points, 12 rebounds and 10 assists for the Nuggets.

For the Cavs, Collin Sexton scored 23 points to avenge a season-low four-point performance in Cleveland’s 133-95 setback in Denver on Feb. 10.

Jarrett Allen recorded 20 points and 10 rebounds for the Cavaliers, who saw their losing skid extended to nine games.

Denver bolted out of the blocks by making its first 12 shots from the floor to record an early 26-14 lead. Porter scored nine points during that stretch and finished the first quarter with 11 as the Nuggets secured a 33-23 advantage.

Sexton made a pair of buckets to trim Cleveland’s deficit to four on two occasions early in the second quarter, however Denver’s sharp shooting didn’t allow the Cavaliers to get any closer. Murray drained consecutive 3-pointers and a fadeaway jumper to highlight Denver’s 24-10 surge to end the second quarter.

Murray scored 18 of the Nuggets’ first 19 points of the fourth quarter to push their lead to 114-95 with four minutes to play. He capped his night with an emphatic dunk.

Denver’s JaMychal Green sustained a left shoulder contusion early in the first quarter. He did not return.