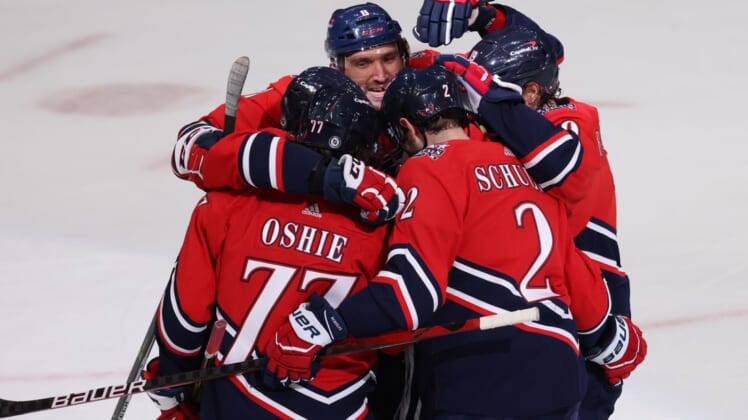 Jakub Vrana capped a two-goal performance by scoring 1:30 into overtime to fuel the host Washington Capitals to a 5-4 victory over the New Jersey Devils on Tuesday.

New Jersey erased a 4-1 deficit by scoring three times in the third period before Vrana used his speed coming off the bench to end the contest. Vrana beat Scott Wedgewood (25 saves) on the forehand for his 10th goal of the season and fifth in his last six games.

T.J. Oshie, Daniel Sprong and defenseman Dmitry Orlov also tallied and Nicklas Backstrom and Evgeny Kuznetsov each notched a pair of assists for the Capitals, who have defeated the Devils four times during their scintillating 7-1-1 stretch.

Janne Kuokkanen collected a goal and an assist and Miles Wood, Yegor Sharangovich and defenseman Damon Severson also scored for the Devils, who have lost nine of their last 11 games (2-8-1). New Jersey has been outscored 17-11 by Washington this season.

Wood scored from the left circle at 5:47 of the third period and Sharangovich tallied 4 1/2 minutes later after a defensive breakdown to cut Washington’s lead to 4-3.

Severson forged a tie with 7:40 remaining after his wrist shot from well above the circles handcuffed Vitek Vanecek (27 saves).

Oshie deflected defenseman Justin Schultz’s blast from the point to open the scoring with 2:38 remaining in the first period. The goal was Oshie’s sixth of the season and fifth on the power play.

Vrana’s goal 7:42 into the second period doubled the advantage before Sprong gave Washington a 3-0 lead nearly three minutes later. Sprong raced up the left wing and wired a shot from the left circle that sailed past Wedgewood for his fourth goal of the season and second in three meetings with New Jersey.

Kuokkanen converted a centering feed from Travis Zajac to trim the deficit at 12:44, however Orlov answered just 19 seconds later. Orlov’s wrist shot from the edge of the right circle handcuffed Wedgewood for his third goal of the season and second in as many games.