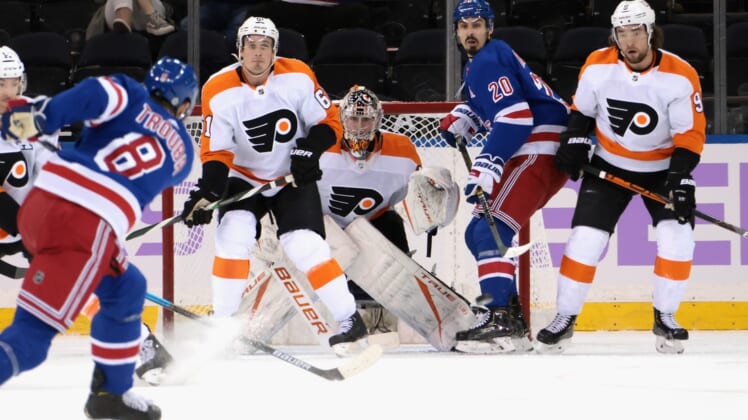 Jakub Voracek scored an unassisted breakaway goal with 1:13 left in overtime for the visiting Philadelphia Flyers, who squandered an early two-goal lead before beating the New York Rangers 5-4 on Monday.

Voracek stepped in front of Artemi Panarin and picked off a clearing pass by Rangers goalie Keith Kinkaid. The right winger raced in alone, screeched to a halt in the crease and forced Kinkaid to sprawl to his right before Voracek tucked the puck into the wide-open net.

James van Riemsdyk, Ivan Provorov, Joel Farabee and Claude Giroux also scored for the Flyers, who won for the second time in six games (2-4-0). Voracek and Sean Couturier each had two assists while Provorov, Giroux and Farabee had one apiece. Philadelphia goalie Carter Hart made 20 saves.

The Flyers raced out to an early lead by scoring twice in a 78-second span early in the first period. Van Riemsdyk capped an odd-man rush by taking a pass from Farabee and shuffling from the forehand to the backhand before beating Kinkaid at the 3:47 mark.

Couturier won a faceoff with Mika Zibanejad deep in the Rangers’ zone before setting the screen that led to the Flyers’ second goal. The puck bounced to Provorov, whose shot sailed past a jumping Couturier and into the far side of the net beyond Kinkaid.

The Rangers took the lead by scoring three unanswered goals in a 7:04 stretch in the second. Panarin cut the gap in half at 8:12, when, in one motion, he took a pass from Tarmo Reunanen, fired a shot from the faceoff circle and fell to the ice as the puck sailed into the net.

Panarin set up the game-tying goal by taking a cross-zone pass from Brendan Smith, racing up the ice and threading the puck past defenseman Philippe Myers and to Blackwell, who fired a shot past a sprawling Hart at 10:52.

The Rangers took their first lead with 4:44 remaining in the second when Gauthier took a pass from Filip Chytil, dashed past Shayne Gostisbehere and scored after going from his forehand to the backhand.

The Flyers tied the score 3:20 later and nine seconds into a power play generated when Gauthier was whistled for high-sticking. Giroux passed from behind the net to Farabee, whose shot went under Kinkaid’s stick arm.

A lengthy battle for the puck near the boards deep in the Flyers’ zone led to Rooney’s goal from point-blank range 2:56 into the third. Philadelphia tied it with another power play goal at the 5:33 mark, when Giroux, stationed next to Kinkaid, redirected a shot by Voracek.