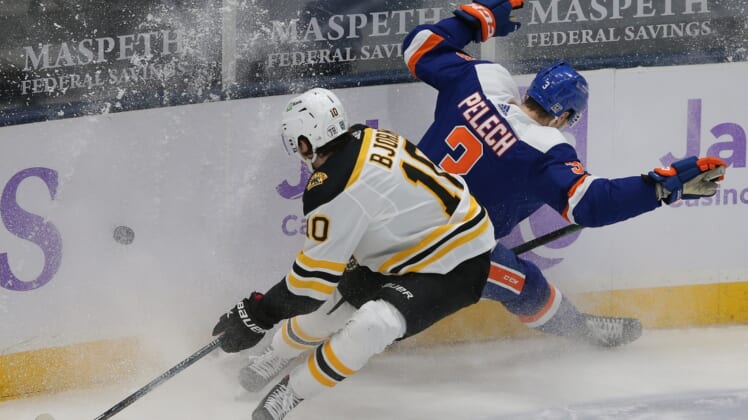 Mathew Barzal scored a tie-breaking power play goal 5:30 into the third period Saturday night for the host New York Islanders, who went on to snap the Boston Bruins’ 10-game point streak with a 4-2 win in Uniondale, N.Y.

Jean-Gabriel Pageau scored twice, including a short-handed goal that iced the victory with 5:28 left. Jordan Eberle also scored for New York, which has won three of four. Goalie Semyon Varlamov made 28 saves.

Brad Marchand and Patrice Bergeron scored for the Bruins, who lost in regulation for just the second time this season. The Islanders also earned a 1-0 win over visiting Boston on Jan. 18. Goalie Tuukka Rask recorded 38 saves for Boston, which went 9-0-1 during its point streak.

The Bruins opened the scoring when Bergeron passed from behind the Islanders’ net to a wide-open Marchand, who had a burst of momentum before he fired a shot past Varlamov at the 8:41 mark in the first.

The Islanders tied the score just under three minutes later when Pageau put back the rebound of his own shot with 8:24 left.

The Islanders took their first lead with 4:44 remaining after a clearing pass by Scott Mayfield hit Brock Nelson, who dished to Eberle, who fired a shot into the far side of the net under Rask’s stick.

The Bruins tied the score following an end-to-end rush late in the second. Jeremy Lauzon chipped the puck from behind Boston’s net to David Pastrnak, who fired the puck through the neutral zone. Marchand caught up and passed to Bergeron, whose shot sailed under Varlamov’s stick with 3:09 left.

Pastrnak’s hooking penalty — the Bruins’ lone penalty Saturday — set up Barzal’s go-ahead goal, which he scored off a nifty whirling pass from just outside the crease by Anders Lee. With Rask leaning towards Lee, Barzal fired a shot over the goalie’s shoulder.

Eberle was whistled for high sticking with 6:23 remaining, but Leo Komarov converged upon David Krejci and Nick Ritchie at the back of the Islanders’ zone and stole the puck from the Bruins’ duo. Komarov headed up the ice and passed to a streaking Pageau, who got ahead of Pastrnak and Bergeron and beat Rask on the semi-breakaway.

It was Pageau’s first two-goal game with the Islanders and the eighth of his career.