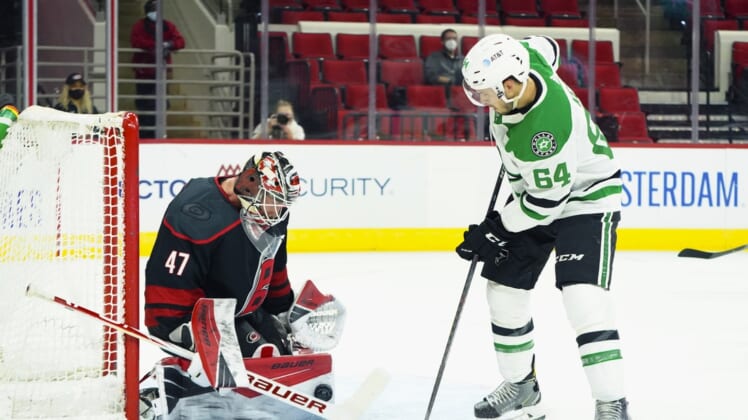 Vincent Trocheck scored twice early in the first period to lift the Carolina Hurricanes to a 4-1 victory over the Dallas Stars on Saturday in Raleigh, N.C.

Andrei Svechnikov and Ryan Dzingel each scored a power-play goal for the Hurricanes, who have won two straight contests since having three games postponed due to COVID-19 issues. Martin Necas and Sebastian Aho notched two assists apiece in the victory.

James Reimer made 10 saves after being summoned into the contest at 2:47 of the first period following an upper-body injury to Petr Mrazek. The latter was injured following a collision with teammate Max McCormick.

Former Hurricane Anton Khudobin yielded four goals on 16 shots before being pulled midway into the second period. Jake Oettinger made 10 saves in relief and Joe Pavelski scored on the power play for the Stars, who were handed their first loss of the season after outscoring the opposition 19-6 in the previous four games.

Carolina wasted little time getting the early jump on Dallas on Saturday.

Necas’ backhanded feed from behind the goal line found Trocheck, whose shot from in close sailed over the glove of Khudobin at 4:05 of the first period. Steven Lorentz was credited with an assist for his first career NHL point after making his debut in the Hurricanes’ 1-0 overtime win over the Tampa Bay Lightning on Thursday.

Trocheck doubled the advantage just 2:50 later, as Trocheck backhanded a loose puck in the slot past Khudobin for his fourth goal in his last four games.

Carolina doubled the advantage after tallying twice in a 99-second span midway into the second period. Svechnikov tucked home a backhand shot at 8:42 for his team high-tying fourth goal, and Dzingel converted Necas’ cross-ice feed at the right doorstep to chase Khudobin from the game.

The Stars finally solved Reimer on their fifth power-play opportunity at 9:19 of the third period. Pavelski cleaned up a rebound to score his fifth goal of the season and fourth with the man advantage.