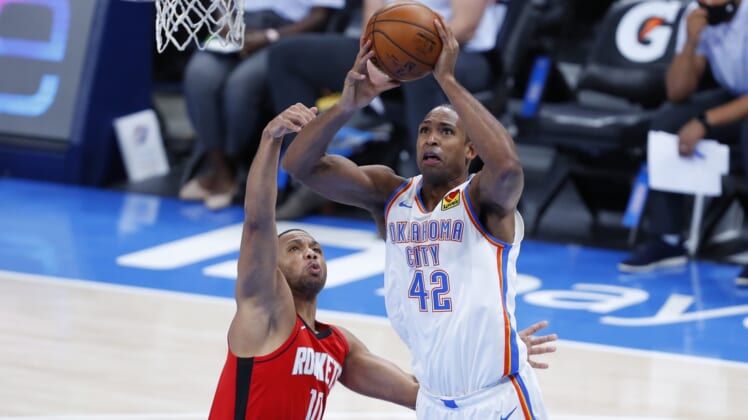 Eric Gordon scored 25 points and led the Rockets’ record 3-point barrage as Houston rolled to a 136-106 win over the host Oklahoma City Thunder on Monday.

Gordon hit five of the Rockets’ franchise-best 28 treys. Houston (10-9) earned its sixth win in a row and moved above .500 for the first time this season.

The Rockets’ previous record for 3-pointers in a game was 27 last season, which set an NBA record at the time. The Milwaukee Bucks broke that record earlier this season with 29.

The Rockets got off to slow starts in each of their previous two games, falling behind by double figures before coming back to beat the Portland Trail Blazers and New Orleans Pelicans.

On Monday, though, Houston didn’t need any time to get going.

The Rockets reeled off 18 consecutive points to take a 21-4 lead and kept pouring it on.

By the time the first quarter was over, the Rockets tied an NBA record for 3-pointers in a quarter with 11 and scored 48 points.

It was the second consecutive game with a 48-point quarter for Houston, which had 48 points in the second quarter Saturday at New Orleans.

The 48 points were the most allowed by the Thunder in a quarter since the franchise’s move to Oklahoma City, topping the previous mark of 45 by Atlanta — twice in the same game — in January 2019.

Six different players hit 3-pointers in the first for the Rockets, with five of them hitting two each.

The Rockets hit seven consecutive shots during that 18-0 run — all by Victor Oladipo, John Wall and Christian Wood.

Houston was 11 of 14 from behind the arc in the first, shooting 65.4 percent from the field overall in the quarter.

The Thunder (8-11) have dropped two straight and five of their past seven.

Wall and Wood added 18 each for the Rockets while Oladipo had 15. Wood grabbed a game-high 11 rebounds.

Shai Gilgeous-Alexander led the Thunder with 19 points while Darius Bazley and Hamidou Diallo added 15 each.