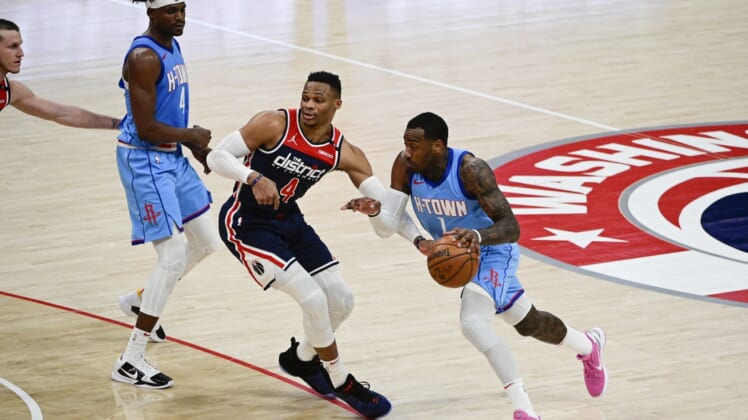 Bradley Beal scored 37 points as the Washington Wizards spoiled John Wall’s return to the nation’s capital with a 131-119 victory over the Houston Rockets on Monday.

Beal made 14 of 24 shots from the field and Davis Bertans sank five 3-pointers to highlight his 18-point performance for the Wizards, who posted consecutive wins for just the second time this season.

Russell Westbrook, who was acquired in the December deal that sent Wall to Houston, recorded a triple-double while playing in both games of a back-to-back set for the first time this season. Westbrook had 16 points — albeit on 8 of 22 shooting from the floor — to go along with 15 assists and 13 rebounds.

Wall scored 22 of his season-high 29 points in the first half and added 11 assists in his return to Washington. The 30-year-old spent the last decade with the Wizards after the team selected him with the top overall pick of the 2010 NBA Draft.

David Nwaba collected a season-high 19 points and 11 rebounds and Jae’Sean Tate added 18 points for the injury-riddled Rockets, who have dropped a season-high six in a row.

Beal did it all during the third quarter, including the curious move of crawling under the bleachers to retrieve a loose ball. On the court, Beal made a pair of jumpers, a layup and a 3-pointer to account for nine of his team’s first 10 points of the quarter to stake Washington to an 82-73 lead.

Raul Neto scored eight points in the quarter, including a driving layup that pushed the Wizards’ advantage to 97-83. Houston closed the deficit to eight at 124-116 with 2:50 to play, but Westbrook drained a mid-range jumper and set up Rui Hachimura for a reverse layup to essentially seal the win.

Wall bolted out of the blocks by scoring 15 points in the first quarter, however his former team held a 38-34 advantage at the end of the session.