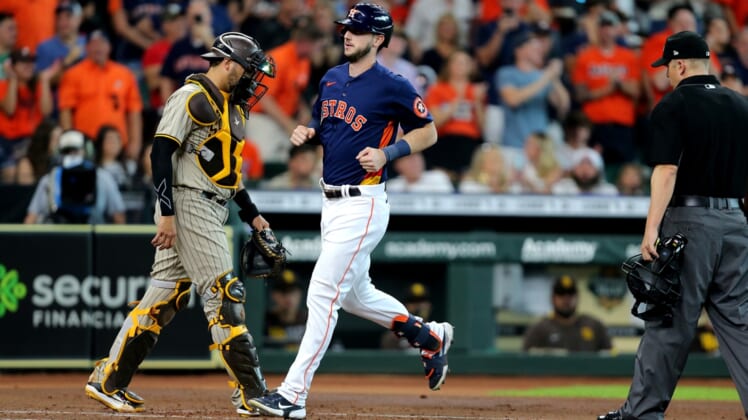 Kyle Tucker clubbed his club-leading 11th home run as part of a four-run first inning in support of Zack Greinke and the Houston Astros earned a 7-4 interleague home victory over the San Diego Padres on Sunday.

The Astros averted a three-game series sweep with an ambush of Padres left-hander Blake Snell (1-2), who scuffled through a second consecutive subpar outing. Snell has lost successive starts after earning just one decision over his first nine appearances of 2021.

Jose Altuve and Chas McCormick singled in succession off Snell in the bottom of the first, with Alex Bregman adding a run-scoring groundout for the opening run. Carlos Correa followed with the first of his two walks off Snell before Tucker lined a 1-1 fastball into the left-field seats, a three-run, opposite-field shot that extended the lead to 4-0.

Snell retired the side in order in the second inning but the Astros tacked on three additional runs in the third, with Bregman and Correa earning one-out walks before Aledmys Diaz delivered a two-run double to left. Diaz came home when Taylor Jones single to right for a 7-0 lead.

Snell did not return for the fourth, having allowed a season-high seven runs on five hits and three walks. He was charged with five runs in his previous start against the Milwaukee Brewers.

Greinke (5-2) retired the first eight batters he faced before No. 9 hitter Jorge Mateo lined a two-out single to center in the third.

Greinke ran into a spot of trouble in the fourth after Fernando Tatis Jr. and Eric Hosmer produced back-to-back two-out singles, but ended the threat with an infield foul popup off the bat of Ha-Seong Kim.

Greinke erased baserunners in the sixth and eighth with inning-ending, double-play grounders. The lone blemish on his line came when Padres catcher Webster Rivas smacked a homer to left with one out in the fifth for his first career hit.

Greinke logged eight innings for the third time this season as he allowed six hits and one walk while notching four strikeouts. He improved to 14-3 in his career against the Padres.