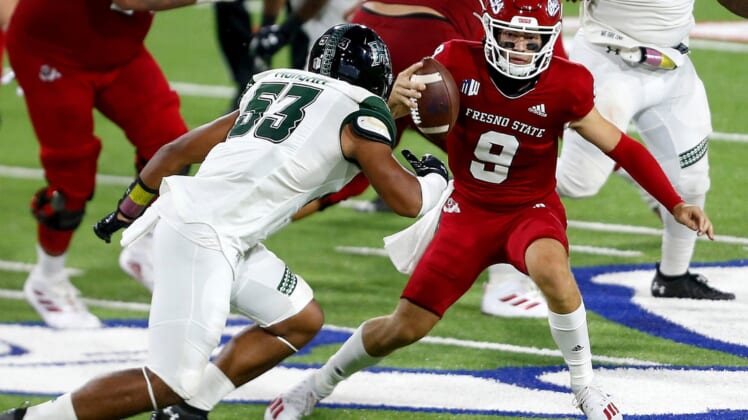 Hugh Nelson nabbed an interception off a deflection with nine seconds left to cap Hawaii’s 17-point, fourth-quarter rally for a 27-24 upset of No. 18 Fresno State in Mountain West play on Saturday night at Honolulu.

The comeback marked the first time the Rainbow Warriors beat a ranked team since 2010, when they notched a 27-21 home win over No. 19 Nevada, quarterbacked by Colin Kaepernick.

Jake Haener passed for 388 yards and three touchdowns but was intercepted four times and lost a fumble for the Bulldogs (4-2, 1-1). Overall, Fresno State committed six turnovers.

The final interception went off the hands of Ty Jones and was picked off by Nelson at the Hawaii 3-yard line.

Zane Pope caught five passes for 113 yards and two touchdowns, and Jalen Cropper collected one scoring pass for Fresno State, which outgained the Rainbow Warriors 505 to 348.

Brayden Schager completed 11 of 27 passes for 116 yards for Hawaii in his first career start in place of injured Chevan Cordeiro. Calvin Turner scored two touchdowns (one rushing, one receiving), Caleb Phillips had a scoring reception and Dae Dae Hunter rushed for 127 yards.

Cortez Davis also had an interception for the Rainbow Warriors while Jonah Laulu recovered a crucial fumble.

Hawaii trailed by 14 when Bethley recorded his second interception with 14:13 remaining to set up a four-play, 44-yard scoring drive. Schager tossed a 26-yarder to Phillips to bring the Rainbow Warriors within 24-17 with 12:06 left.

The next time Hawaii had the ball, the Warriors went 60 yards on six plays with Schager tossing an 18-yard touchdown pass to Turner to knot the score with 7:05 remaining.

Just 38 seconds later, Bethley strip-sacked Haener and Laulu recovered at the Fresno State 44-yard line. Eight plays later, Shipley kicked a 33-yard field goal to give the Rainbow Warriors the three-point lead that they protected at the finish.

Hawaii scored the game’s first 10 points on Turner’s 1-yard run and Shipley’s 34-yard field goal. Haener threw touchdown passes of 65 and 7 yards to Pope in the first half, and added a 35-yard scoring aerial to Cropper with 9:22 left in the third quarter.