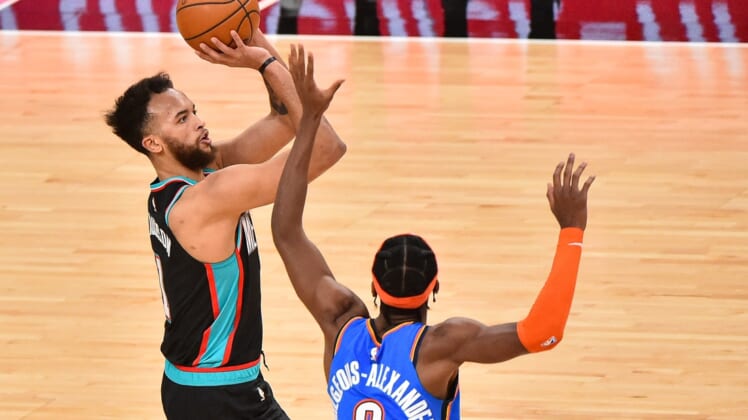 Grayson Allen scored 22 points to lead the Memphis Grizzlies to a 122-113 win over the Oklahoma City Thunder on Wednesday in Memphis.

Memphis had hit just five 3-pointers through the first three quarters but hit seven in the fourth, three by Allen.

Allen’s shooting helped the Grizzlies overcome an off-shooting night for Ja Morant, who was just 4 of 14 from the floor. But Morant affected the game in plenty of ways, picking up his first triple-double of the season and the third of his career with 15 points, 12 assists and 11 rebounds.

The game was tight for much of the first three quarters, with Memphis taking the biggest lead for either team with a 10-2 run to start the second half to go up by nine.

Oklahoma City didn’t score from the field for more than four minutes to start the second half, missing its first seven shots.

But then the Thunder started waking up offensively, hitting six 3-pointers the rest of the third to pull within one by the end of the quarter.

Early in the fourth, the Grizzlies took over, with a 19-3 run to take control for good.

Seven of those points were scored by Jonas Valanciunas, who finished with 22 points and 12 rebounds. Kyle Anderson added 20 points with five rebounds, five assists and five steals.

Memphis coach Taylor Jenkins was ejected in the final minute of the game after picking up his second technical as he tried to get a timeout called. Jenkins was also called for a technical after the third quarter.

Oklahoma City arrived at the arena less than two hours before tip-off after traveling the day of the game following their 115-104 loss to Portland on Tuesday in Oklahoma City.