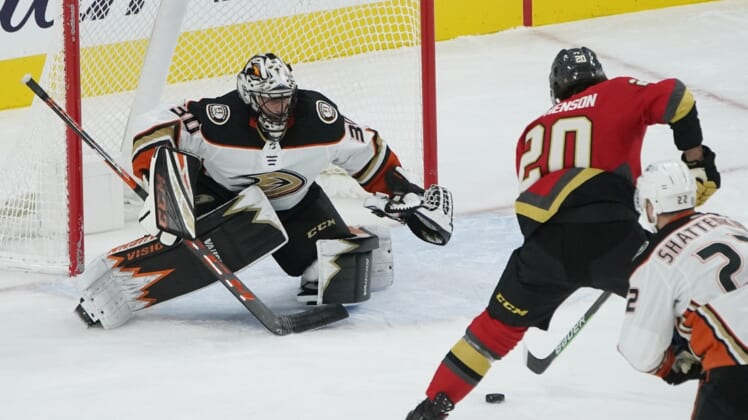 Zach Whitecloud scored on a rebound with 3:56 remaining as the Vegas Golden Knights, despite blowing a three-goal lead in the third period, pulled out a 5-4 victory over the Anaheim Ducks on Tuesday night in Las Vegas.

Whitecloud pinched in from the left side of the net to knock in a rebound of a William Carrier shot to score the winner, his second goal of the season. Vegas improved to 8-1-1, its best 10-game start in franchise history. The Golden Knights are 7-0-1 at T-Mobile Arena, the second-best home record in the NHL behind the Tampa Bay Lightning’s 6-0-0 mark.

Chandler Stephenson had a goal and an assist, Jonathan Marchessault, Alex Tuch and Nicolas Roy each scored a goal and Cody Glass added two assists for Vegas. Marc-Andre Fleury finished with 19 saves to improve to 5-0-0 this season and 17-4-0 all-time against Anaheim.

Troy Terry posted a goal and an assist and Isac Lundestrom, Adam Henrique and Ryan Getzlaf also scored for Anaheim, which fell to 0-2-1 against the Golden Knights this season. Ryan Miller, making back-to-back starts for the first time this season, logged 26 saves for the Ducks, and Kevin Shattenkirk added two assists.

Roy gave the Golden Knights a 4-1 lead near the end of the second period with his first goal of the season. He took a drop pass from Glass at the top of the right circle and then fired a wrist shot past Miller’s blocker side.

However, Anaheim rallied to tie it 4-4 with goals on three consecutive shots over span of 4:57 in the third period. Terry got the first on a rebound of a Shattenkirk shot. Henrique followed when he dribbled a wrist shot under Fleury’s pads. Getzlaf then tied it with his first goal of the season, tapping in a Rickard Rakell pass on the backdoor.

That set the stage for Whitecloud’s game-winner. Vegas had allowed just five third-period goals all season before Anaheim’s comeback.