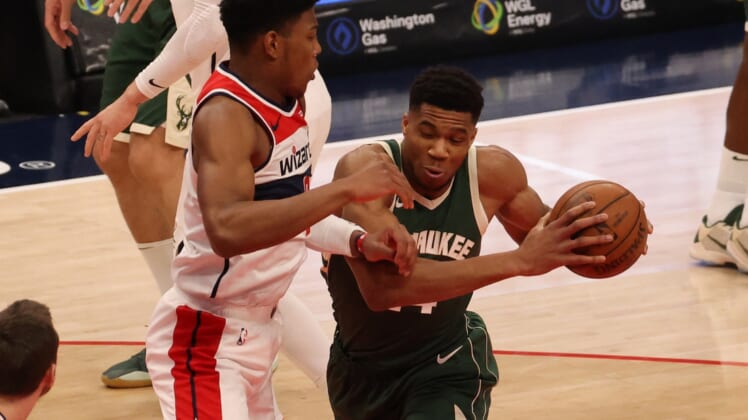 Giannis Antetokounmpo recorded his third triple-double in as many games, and the Milwaukee Bucks held off a second-half surge to beat the host Washington Wizards, 133-122, on Monday in Washington D.C.

Antetokounmpo finished with 31 points, 15 rebounds and 10 assists for his third consecutive triple-double — fourth, counting his Most Valuable Player-winning performance in the March 7 All-Star Game — and led three Bucks who scored at least 22 points.

Brook Lopez shot 8-of-12 from the floor for 22 points, and Khris Middleton added 23 points. The trio paced Milwaukee through a dominant first two-and-a-half quarters, pushing its lead to as many as 26 points in the third quarter.

Behind Bradley Beal, who scored 26 of his game-high 37 points in the second half, when Washington whittled away at the deficit during a run that started late in the third quarter and stretched into the fourth.

The Wizards pulled within seven points with a little more than four minutes remaining, but they didn’t get any closer. The Bucks put the game away over a stretch in the final three minutes when Antetokounmpo scored on back-to-back possessions, then found Lopez for his 10th and final assist for a 131-119 lead.

Seven Bucks scored in double-figures, with Jrue Holiday adding 15 points and Donte DiVincenzo netting 12. Bobby Portis notched 13 points off the bench, and Bryn Forbes made both of his 3-point attempts en route to 10 points.

Washington got 23 points and a game-high 17 assists from Russell Westbrook. Rui Hachimura, who produced a 29-point effort in Washington’s 125-119 loss to Milwaukee on Saturday, followed up Monday with 22 points, seven rebounds and five assists.

Hachimura shot 4-of-9 from 3-point range, while Beal went 4-for-7 and Westbrook shot 3-for-6 from beyond the arc. Washington went 16-for-38 from outside as a team, outpacing Milwaukee’s 11-for-28. The Bucks outrebounded Washington 46-33.