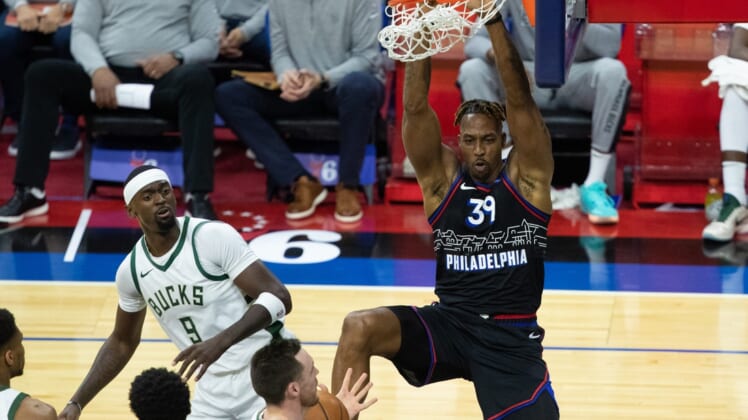 Giannis Antetokounmpo had 32 points, 15 rebounds and five assists and the Milwaukee Bucks rallied from a 19-point deficit for a 109-105 overtime victory over the host Philadelphia 76ers on Wednesday.

Antetokounmpo scored 10 points in overtime, including a personal 7-0 run to seal the win.

Donte DiVincenzo added 20 points and eight rebounds, Jrue Holiday scored 19 points and Khris Middleton had 15 for the Bucks, who won their fifth in a row. Brook Lopez contributed 14.

The Sixers, who fell to 4-6 without injured All-Star Joel Embiid, had their six-game winning streak snapped.

The Bucks missed their first 10 shots of the second and soon trailed by 15, causing head coach Mike Budenholzer to call timeout. Holiday finally broke the skid with a layup to close the Bucks within 35-22 with 6:26 remaining.

The Sixers led 45-31 at halftime thanks in large part to 10 points from Harris.

Milwaukee posted its second fewest points in any half in the last five years.

Philadelphia held a 74-65 advantage at the end of a chippy third, which included three technical fouls called, two on the Sixers.

Antetokounmpo converted a three-point play with 8:41 left to tie the game at 76. Antetokounmpo then grabbed a miss by DiVincenzo on the next possession and threw down a dunk for a two-point lead.

Curry appeared to injure his left ankle with 7:23 remaining and hobbled to the locker room.

But DiVincenzo responded with a trey for an 83-82 Bucks advantage.

The Sixers closed within 91-90 after Green’s corner trey with 10.8 seconds remaining.

Korkmaz’s trey with 0.4 seconds left tied the game at 93 and forced overtime.