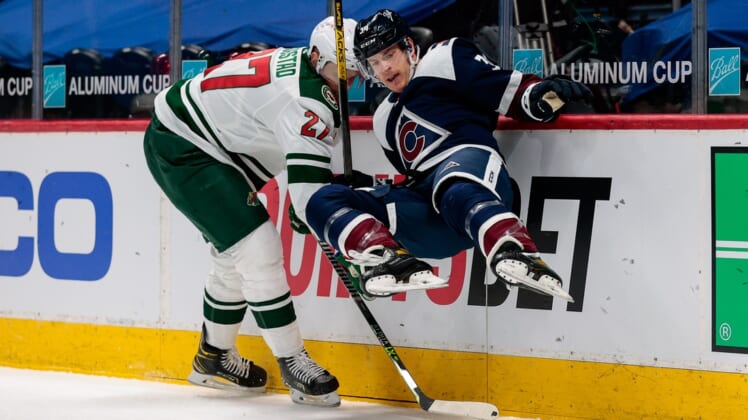 Captain Gabriel Landeskog collected a goal and two assists and Philipp Grubauer made 31 saves to fuel the Colorado Avalanche to a 6-0 win over the Minnesota Wild on Saturday in Denver.

Cale Makar had a goal and an assist and fellow defenseman Devon Toews joined Mikko Rantanen, Tyson Jost and Valeri Nichushkin in scoring a goal. Nathan MacKinnon had three assists and Ryan Graves and Joonas Donskoi set up two goals apiece for Colorado.

The shutout was the fifth of the season for Grubauer.

Defenseman Carson Soucy returned to the Minnesota lineup after serving a one-game suspension. He replaced Matt Dumba, who sustained a lower-body injury when he went skates first into the boards on Thursday night.

The Avalanche led 2-0 after the first period and scored two quick goals to start the second.

The first one came 46 seconds into the frame. Rantanen skated down the right side and beat Kahkonen with a snap shot for his 17th goal of the season and third in the last two games.

Just 1:07 later, Donskoi fed Jost in the slot, with the latter’s one-timer handcuffing Kahkonen for his second goal of the season.

Makar glided into the slot above the circles and beat a screened Kahkonen at 4:13 of the first period to open the scoring. It was his second goal of the season.

Landeskog skated down the left side, took a pass from MacKinnon and put a shot on Kahkonen. The puck flipped over the goaltender and rolled behind him into the net at 11:05 of the first period. It was Landeskog’s ninth goal of the season.

The Avalanche closed the second period with another goal, this time when Toews cashed in on a pass from MacKinnon for his fifth of the season at 18:47.

Nichushkin’s sixth of the season at 4:52 of the third made it a six-goal game.

Prior to the game, the Avalanche acquired goaltender Jonas Johansson from the Buffalo Sabres for a sixth-round draft pick. Johansson has been serving as backup in Buffalo and will serve the same role with Colorado.