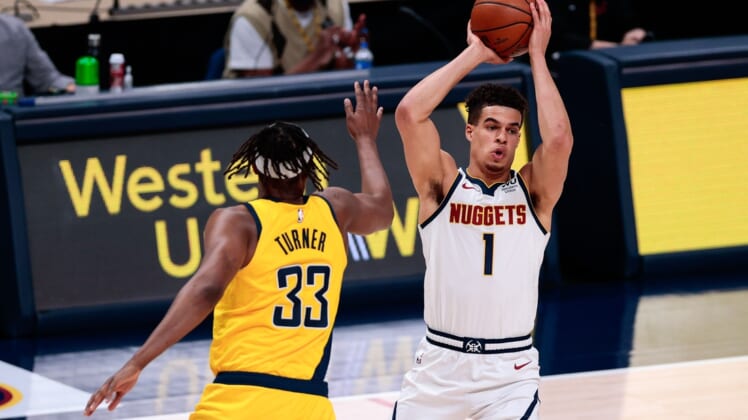 Nikola Jokic had 32 points and 14 rebounds, Will Barton and Michael Porter Jr. scored 20 points each and the host Denver Nuggets rallied to beat the Indiana Pacers 121-106 on Monday night.

JaMychal Green and Jamal Murray added 16 apiece for the Nuggets, who outscored the Pacers 34-15 in the fourth quarter.

The game was scheduled to tipoff at 7 p.m. Mountain time but was pushed back an hour due to the snowstorm that blanketed Colorado over the weekend. Denver International Airport was closed from early Sunday until mid-afternoon on Monday, stranding the Pacers in Phoenix. The Pacers arrived in Denver at approximately 2 p.m. local time Monday.

Indiana looked fresh in the third quarter when it rallied from nine down at halftime to take the lead. The Pacers opened the period on a 17-7 run to move on top 73-72, their first lead of the game. Myles Turner and LeVert hit 3-pointers to extend the advantage to 79-74 with 5:36 left in the third.

The Nuggets rallied to go retake the lead 85-84 on a tip-in by Jokic, but Indiana led 91-87 heading into the fourth.

Denver surged back in front to start the final quarter. Green hit a 3-pointer to start a 14-0 run to open the period. Indiana missed its first six shots and had four turnovers before Sabonis ended the drought by sinking a put-back layup with 7:05 left.

Barton hit a 3-pointer and Jokic also drilled one from deep and a 16-footer to make it 109-93 with 4:56 left, and the Nuggets closed it out from there.

The game was tied after the first quarter, but the Nuggets went on a 22-2 run to go ahead 57-37 with 5:23 left in the second. Indiana held Denver without a field goal for more than four minutes and scored 12 straight points to get within eight.