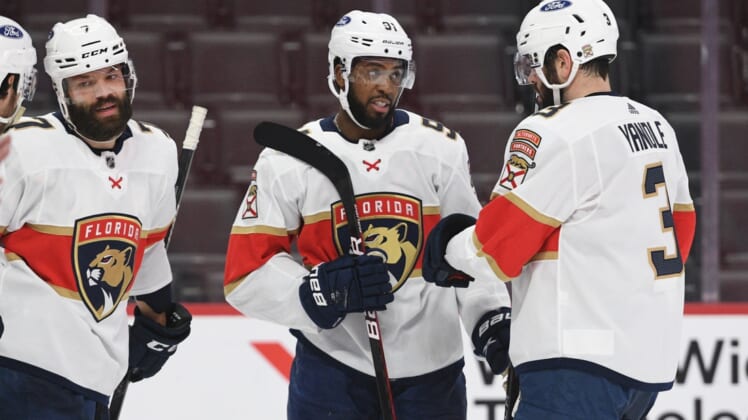 MacKenzie Weegar and Anthony Duclair each had a goal with an assist and Keith Yandle recorded three assists for the Panthers, who scored a season-high four times in the first period.

Florida scored on four of its first eight shots on the way to winning a third straight overall and extend the franchise’s best road start to 6-0-1. Jonathan Huberdeau notched two assists and Chris Driedger made 30 saves as Florida improved to 11-2-2 on the season.

It was the highest-scoring game of the season for Florida, which plays again Saturday at Detroit, where the Panthers have won six in a row dating back to January, 2018.

Bobby Ryan scored for the first time in 15 games and Valtteri Filppula added a goal for Detroit, which has lost three in a row and is stuck in an 0-3-2 home rut.

The Red Wings failed four more times on the power play, and are mired in an 0-for-34 stretch with the man-advantage.

Florida scored 6:09 into the game when Juho Lammikko, who recorded his first NHL goal in Wednesday’s overtime win over Carolina, got his second from the slot off a prime set-up via Brett Connolly. The Panthers made it 2-0 less than two minutes later when Weegar ripped a shot past Detroit goaltender Thomas Greiss.

Hornqvist concluded a tic-tac-toe play with Huberdeau and Yandle to make it 3-0 with 7:15 left in the opening period. Detroit pulled one back on Ryan’s slap shot with 5:54 to go in the first. However, Florida scored 69 seconds later as Barkov beat Detroit’s Marc Staal to the puck in the blue paint to tap in his sixth goal.

Aaron Ekblad’s fifth goal on a one-timer from Weegar with 22 seconds left in the second period made it 5-1 Florida.

Filppula’s goal came 2:49 into the final period just after a Detroit power play ended. Hornqvist posted his eighth goal and Duclair his second later in the period.

Greiss was pulled after allowing a season-high four goals on 13 shots over the first 20 minutes. Jonathan Bernier stopped 23 of 26 shots in relief.