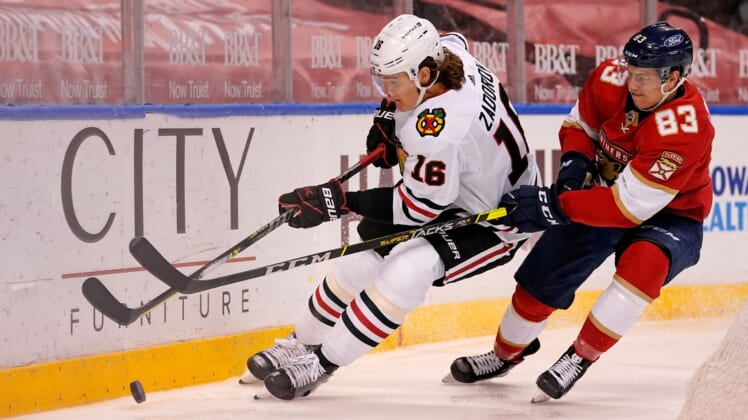 Aleksander Barkov scored a go-ahead, short-handed goal with 6:34 left in the third period, leading the Florida Panthers to a 6-3 win over the visiting Chicago Blackhawks on Monday night in Sunrise, Fla.

The Panthers trailed 3-1 midway through the second period before producing the game’s final five goals.

At the halfway point of this regular season, the Panthers (19-5-4) are tied for the top point total in the NHL.

The goals by Verhaeghe and Wennberg were empty-netters.

The tally by Forsling was his first with the Panthers. He also showed toughness by remaining in the game after getting hit on his right knee with a hard-hit puck.

Sergei Bobrovsky made 26 saves to earn his sixth straight win, his longest streak as a Panthers goalie.

Patrick Kane, Philipp Kurashev and Brandon Hagel scored for the Blackhawks, who are 0-3-1 against Florida this year.

Kevin Lankinen made 30 saves for Chicago.

The teams traded goals in the first period.

Chicago opened the scoring with 10:38 gone as Kane picked up a loose puck and fired a quick-release wrist shot from the left circle.

Florida tied the score with its second-string power-play unit. With just 1:45 remaining in the first, Tippett left his feet to muscle up on a shot that caromed in off two Chicago defensemen.

The Blackhawks took a 3-1 lead midway through the second on goals by Kurashev and Hagel. Kurashev scored off a Mattias Janmark pass with 10:19 gone, and Hagel jammed in a rebound from the doorstep at 13:02.

Florida got its second power-play goal to cut its deficit to 3-2 with 5:02 remaining in the second as Ekblad’s shot from the back of the left circle found an opening.

The Panthers tied the score 3-3 just 62 seconds later as Forsling scored on a similar goal.

Florida, which is now 16-0-2 when tied or leading headed to the third period, got Barkov’s rebound goal to take its first lead of the game.