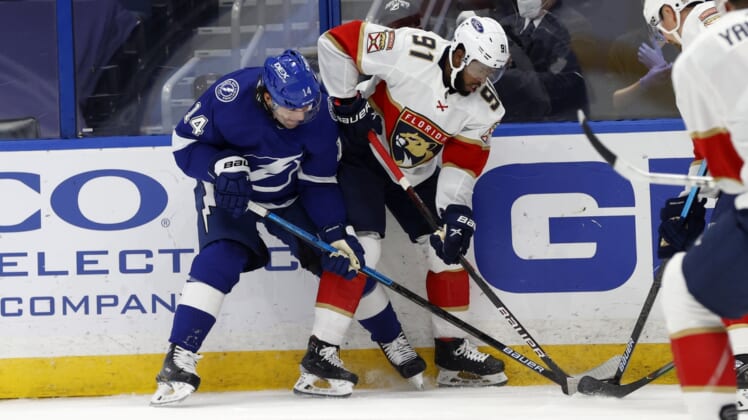 Florida’s Aleksander Barkov, Jonathan Huberdeau and Anton Stralman each had a goal and an assist, and the Panthers dealt Tampa Bay its first home loss this season, beating the host Lightning 6-4 on Monday night.

Barkov’s goal was the 420th point of his career, surpassing Olli Jokinen for second place all-time in franchise points.

Owen Tippett, Frank Vatrano and Anthony Duclair tallied for Florida, which is 4-0-0 after losses this season and 4-0-1 on the road. Goalie Chris Driedger stopped 27 of 31shots to go to 4-1-1.

Lightning star Steven Stamkos scored in his return after a false positive coronavirus test, forcing the captain to miss both games in South Florida.

Tampa Bay failed in its bid to set a franchise record with its seventh straight home win to start a season, and all 10 goals were scored at even strength.

In the clubs’ third meeting in five days and the first at Amalie Arena in front of limited fans, Stamkos blistered his eighth goal from the left dot at 6:24 of the first period.

But Huberdeau answered by tapping in a shot from the low crease after Patric Hornqvist beat McElhinney to a puck behind the net, tying it at 1 just 92 seconds later.

The teams combined for seven goals in a wild second period.

Vatrano forced a turnover in Tampa Bay’s defensive end early, and Tippett notched his first goal this season for a 2-1 Florida lead.

Luke Schenn hacked Vatrano on a breakaway later, and the Florida left wing converted on his first career penalty shot. Duclair, who was scoreless through 11 games, skated around McElhinney’s net and slid in a wraparound 1:56 later to push it to 4-1.

Volkov, who scored his first career goal Saturday, trimmed it to 4-2 just over a minute later from the left circle, but Barkov swooped in from the right, waited out McElhinney and popped in his fifth just 54 seconds later.

However, Volkov and Johnson scored eight seconds apart to make it 5-4 after 40 minutes.

Stralman scored his first goal 59 seconds into the third for a 6-4 edge, and Florida killed a late penalty to win for just the third time in its last 12 visits to Tampa and for the first time in five years.