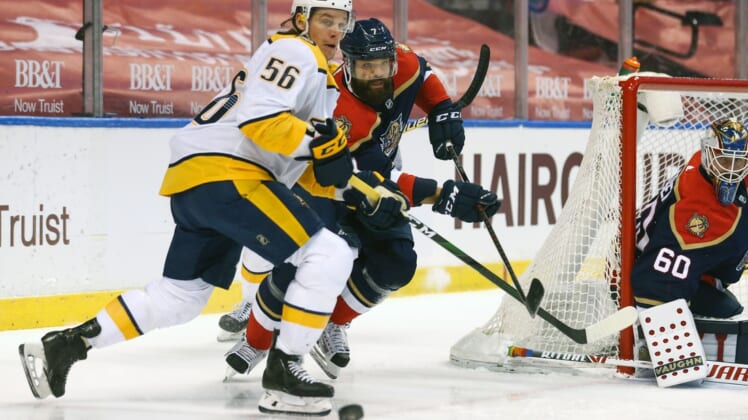 Aleksander Barkov scored the go-ahead goal, and Chris Driedger earned his second career shutout, leading the host Florida Panthers to a 2-0 win over the Nashville Predators on Saturday afternoon in Sunrise, Fla.

Anthony Duclair had an assist as well as an empty-net goal with 14 seconds left. MacKenzie Weegar and Carter Verhaeghe recorded an assist apiece.

Barkov has five goals in his past nine games, and Driedger had 21 saves. Driedger’s only other career shutout was in his first game with the Panthers on Nov. 30, 2019, also against Nashville.

The Panthers’ win overshadowed another brilliant performance by Predators goalie Juuse Saros, who made a career-high tying 47 saves. Saros, who made 40 saves to beat the Panthers, 2-1, on Thursday, has played seven straight games during which he has allowed two goals or less.

On Saturday, he stopped a pair of breakaways — by Alex Wennberg in the second and Barkov in the third.

Saros was particularly spectacular during a scoreless first period. Florida attempted 31 shots and got 22 on goal. The Panthers had 10 of those shots during three fruitless power plays.

“Saros is an aggressive goalie coming out to the top of his crease,” Panthers defenseman Keith Yandle told Fox Sports Florida after the first period. “If we can keep him in his crease, shoot pucks and get screens, that’s the best way to beat any goalie.”

Driedger got in the great goaltending act with 17:13 left in the second, stoning Nick Cousins with a dramatic glove save.

The Panthers finally scored the game’s first goal, with 10:45 left in the second period. After a centering pass from Duclair was fumbled, Barkov lifted a backhander over Saros, who had tripped and had his back to the play.

A lot of the credit for the win goes to Florida’s top line of Barkov, Duclair and Verhaeghe.

“Anytime you reunite with those two guys, you get a little extra step,” Duclair said of his linemates. “You just put the puck in the area for ‘Barky’, and he will figure out the rest.”