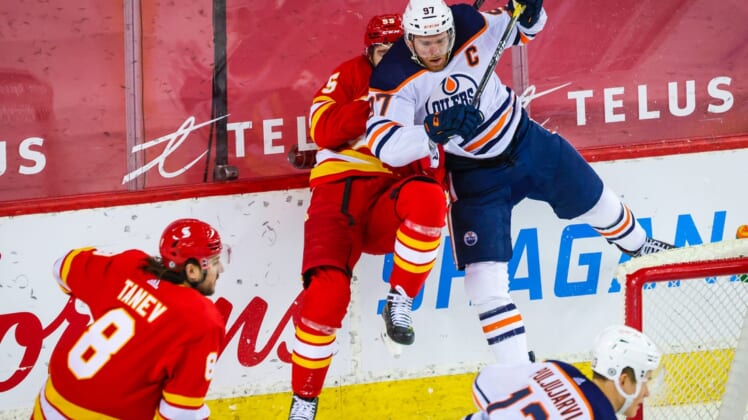 Noah Hanifin scored the winning goal in the third period and Jacob Markstrom made 28 saves as the host Calgary Flames collected their third consecutive victory, a 4-3 decision over the Edmonton Oilers on Monday night.

Dillon Dube, Elias Lindholm and Andrew Mangiapane all collected one goal and one assist for the Flames, who have three consecutive wins for just the second time this season. Mikael Backlund added two assists.

Only 67 seconds after the Oilers tied the game 3-3, Hanifin joined the rush and, upon receiving a drop pass, ripped a shot home at the 6:32 mark of the third period for his third goal in five games. From there, Markstrom held the fort to preserve the win.

The Oilers, who have dropped two straight, will look to rebound when the clubs meet again Wednesday in Calgary.

Following a goalless first period, Dube’s breakaway tally open the scoring. Lindholm stripped the puck from Connor McDavid in the neutral zone and sent Dube on a breakaway, which he converted at the 5:25 mark.

Lindholm took his turn the lighting the lamp, doubling the lead when he joined an odd-man rush and redirected a cross-ice pass from Oliver Kylington at 8:57 of the frame.

However, Adam Larsson put the visitors on the board 52 seconds later. Edmonton finally created some sustained pressure, and it paid off when Larsson buried a rebound.

The second-period scoring spree didn’t end there. Mangiapane again put the Flames ahead by a pair when Edmonton goalie Mike Smith was caught in no-man’s land trying to play a puck in the corner of the rink, and Milan Lucic fed Mangiapane in the slot for a tap-in tally at 13:45.

Josh Archibald made it a one-goal game again when he drove to the net and redirected Devin Shore’s pass with 2:53 remaining in the middle frame.

Red-hot Leon Draisaitl tied the game at 5:25 of the third period with his seventh goal in what is now a five-game scoring streak. Hanifin’s winner came right after, and the Flames managed to hold on.

Smith stopped 23 shots for the Oilers, who also sustained a couple of injuries. Tyson Barrie, who is in the top five in the league in points among defensemen, took a lower-body injury at the end of the first period. Jujhar Khaira left the game with a suspected concussion sustained in a first-period fight with Brett Ritchie.