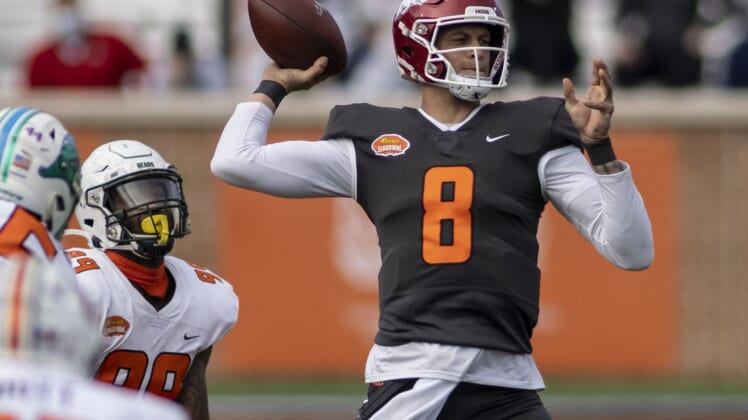 Feleipe Franks of Arkansas passed for 122 yards and a touchdown Saturday to help the National team beat the American squad 27-24 in the Senior Bowl in Mobile, Ala.

American quarterback Kellen Mond of Texas A&M completed 13 of 25 passes for 173 yards and two touchdowns and was named MVP of the contest that featured NFL draft prospects. Mond received increased playing time since Alabama’s Mac Jones was unavailable due to an ankle injury sustained in Thursday’s practice.

Jamie Newman, who played for Wake Forest before transferring to Georgia and then opting out of the 2020 season, was 10-of-14 passing for 118 yards, a touchdown and an interception for the American squad.

Two other quarterbacks saw action for the National team: Ian Book (Notre Dame) was 5-of-11 passing for 48 yards and one interception, and Sam Ehlinger (Texas) completed 4 of 10 passes for 42 yards and a touchdown.

The National’s Michael Carter (North Carolina) had a game-high 60 rushing yards and one touchdown on eight carries. Dez Fitzpatrick (Louisville) caught six passes for 90 yards for the National team and was named Offensive Player of the Game.

Tulane defensive end Cameron Sample (American) was named Defensive Player of the Game after he recorded seven tackles and a half-sack.

The National squad led 13-0 at halftime before Mond guided two third-quarter touchdown drives as the American team took a 16-13 lead. But then, with 44 seconds left in the quarter, Carter scored on a 12-yard run to put the National team ahead to stay.

The National team was coached by Brian Flores and the rest of the Miami Dolphins’ staff. Matt Rhule and the Carolina Panthers’ staff coached the American squad.