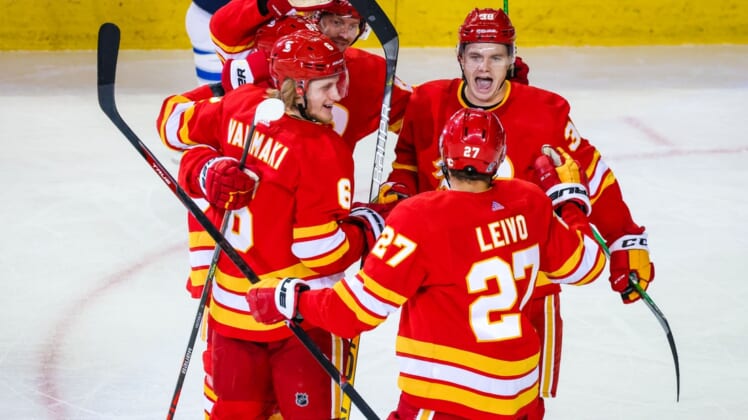 Elias Lindholm’s late power-play goal was the difference as the host Calgary Flames beat the Winnipeg Jets 3-2 in an entertaining affair Tuesday night.

With overtime looming, Calgary’s sputtering power play — which had struggled through a 1-for-14 slump — converted with 102 seconds remaining in regulation. Lindholm sent a low wrist shot from the top of the right circle that ricocheted off a defender’s stick before finding the net for his fourth goal of the season.

Goaltender Jacob Markstrom made 25 saves for the Flames, who have won two straight games and are 7-0-1 in their last eight home games against the Jets.

Pierre-Luc Dubois, acquired via trade from Columbus on Jan. 23, finally played for the Jets after going through the COVID-19 protocol. His time without a game showed, as Dubois failed to register a shot in 13:10 of action.

After a scoreless first period, Winnipeg’s Nikolaj Ehlers opened the scoring with a power-play goal at 3:23 of the second period. Ehlers, who has made a concerted effort to shoot more this season, unloaded a top-shelf wrist shot from just inside the top of the left circle.

However, Calgary’s hottest offensive line drew the game even just over two minutes later. Upon taking a pass from Milan Lucic, Mikael Backlund slipped a shot on net that was denied, but Andrew Mangiapane was on the spot for the rebound tally.

Then it was Calgary’s turn to take a lead but see it disappear a couple of minutes later. Byron Froese netted his first NHL goal in nearly three years, a nifty deflection of Juuso Valimaki’s point shot, to put the hosts up at the 13:34 mark of the period. But Ehlers scored his second of the night by finishing a two-on-one rush with Mark Scheifele to net his eighth goal of the season and make it a 2-2 game.

Andrew Copp collected a pair of assists for Winnipeg, which saw its two-game winning streak snapped and will finally face another team after meeting the Flames four straight games.