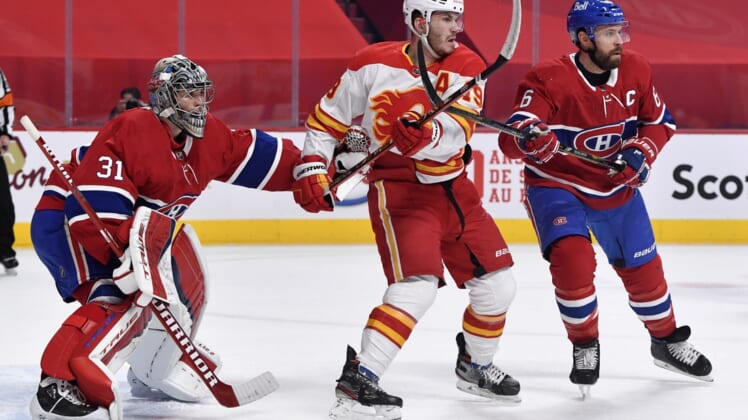 First-period power-play goals by Brendan Gallagher and Shea Weber sent the Montreal Canadiens off and running to a 4-2 home-opener victory over the Calgary Flames on Thursday night.

Carey Price made 23 saves for the Canadiens, who have won three consecutive games.

The Flames, who have lost three straight, will look to make amends when the teams face each other again on Saturday in Montreal.

Josh Anderson and Tyler Toffoli also scored for the Canadiens, and Jesperi Kotkaniemi and Jonathan Drouin had two assists apiece.

Potent special teams were the difference for the Canadiens, who have been dynamite with or without the man advantage this young season.

Gallagher opened the scoring with a power-play marker just past the midway point of the first frame. With the hosts crashing the net, Corey Perry sent a blind pass to Gallagher in the crease, and Gallagher had no trouble depositing the puck into a wide-open net.

Weber doubled the lead with a fortunate goal. Weber unleashed one of his point-shot blasts, and the puck ricocheted off the stick of Flames defender Juuso Valimaki and into the net at the 15:39 mark.

The Canadiens poured it on in the middle frame, too. Anderson extended the lead when he was on the spot to bat a rebound out of the air after Rittich stopped Jesperi Kotkaniemi’s shot on a two-on-one rush at 8:21.

Toffoli made it a 4-0 affair with his team’s fifth short-handed goal of the season — in just the seventh game. Taking advantage of a Flames turnover just inside his team’s blueline, Nick Suzuki sent Toffoli away on a breakaway, and Toffoli converted for his sixth goal of the season with 24.5 seconds remaining in the period.

Lucic scored with 1:18 remaining in regulation to spoil Price’s shutout bid, and then Andersson potted a power-play marker with 21.3 seconds left on the clock — a man-advantage created because the Canadiens erroneously challenged Calgary’s first goal as being offside.