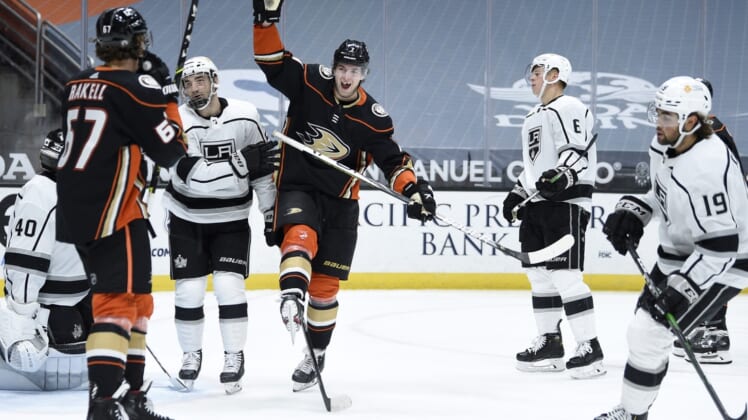 Adam Henrique scored with two minutes remaining in overtime after Rickard Rakell recorded two goals as the Anaheim Ducks used a rare explosion of offense Monday to earn a 6-5 victory over the visiting Los Angeles Kings.

Kevin Shattenkirk, Jakob Silfverberg and Ben Hutton also scored while Max Comtois had three assists as the Ducks reached a season high in goals before the end of the second period. Henrique, Rakell and Shattenkirk each logged an assist.

John Gibson made 21 saves as Anaheim won consecutive games for just the second time and the first time since Jan. 24-26.

Two of the Ducks’ eight victories have come against their Southern California rival. Rakell extended his point streak to six games, during which he has five goals and seven assists.

Adrian Kempe had a hat trick for the Kings, including the game-tying goal with 2:32 remaining in regulation on a deflection in front of the goal for his ninth of the season. Dustin Brown and Andreas Athanasiou added goals as Los Angeles lost for the fifth time in the past six games (1-2-3) but did earn a point for the 11th time in the past 13 games (7-2-4).

Shattenkirk signaled that an offensive game was on the way when he scored for the Ducks 2:45 after the opening puck drop. Kempe tied it for the Kings seven minutes later.

Rakell gave the Ducks a 2-1 lead at 16:46 of the opening period, scoring off a pass from Comtois.

Kempe’s second of the game came on a power play at 16:28 of the second period to bring Los Angeles within a goal, but Rakell scored again at 18:15, his sixth, to put Anaheim up 5-3.

The Kings kept up the fight into the third period, cutting the deficit to 5-4 at 1:18 when Athanasiou scored his fifth of the season after weaving through traffic and flipping a shot past Gibson.

The Ducks were productive despite losing Troy Terry to an upper-body injury and defenseman Josh Manson to a lower-body injury.