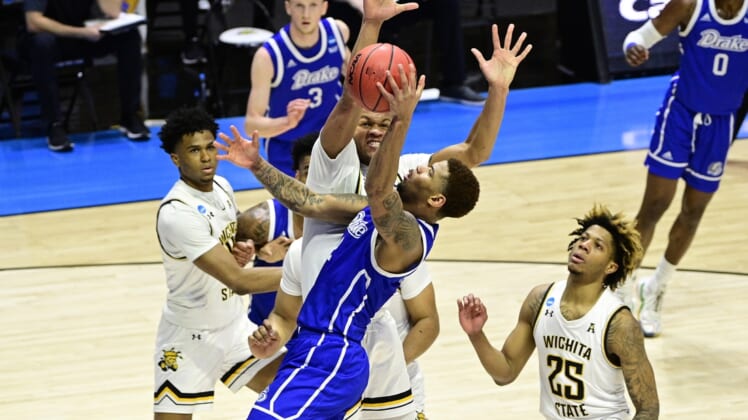 Joseph Yesufu poured in 21 points Thursday as Drake rallied from a frosty first half to upend Wichita State 53-52 in a clash of No. 11 seeds in the First Four of the NCAA Tournament at West Lafayette, Ind.

The Bulldogs (26-4) overcame 37.7 percent shooting that included a 10-minute scoring drought in the first half to claim their first NCAA Tournament victory in 50 years to the day. They posted a 79-72 overtime win over Notre Dame on March 18, 1971.

They also ended an 11-game losing streak against Wichita State, a former Missouri Valley rival that left for the American Athletic Conference four years ago.

Morris Udeze scored a career-high 22 points to pace Wichita State, but the Shockers (16-6) could not get their top threat untracked. Tyson Etienne, the co-player of the year in the AAC, netted just 1 point on 0-for-6 shooting from the field. The Shockers shot just 33.9 percent from the floor.

The Bulldogs gained their first lead, 46-45, since the opening stages on a bucket by Darnell Brodie with 4:15 left. They led the remainder of the game, though Dexter Dennis (13 points) made it interesting with a steal and 3-pointer for the Shockers with 8.1 seconds left.

Yesufu then missed a front-end free throw, but Alterique Gilbert hit the front iron on a 3-pointer at the buzzer.

Tremell Murphy added 11 points for Drake, which closed the first half with a 10-0 run to pull within 21-20 at the break. Yesufu scored seven points, all in the final 3:02, to key the late surge.

The Bulldogs made their first attempt but then missed 13 straight shots and went 10 minutes without a field goal before Brodie connected at the 6:30 mark.

Wichita State enjoyed a 16-1 flurry and built a 12-point margin while Drake went ice cold, but the Shockers did not score in the final five minutes of the half while shooting 28.1 percent. Udeze scored nine first-half points to pace Wichita State, though Etienne went 0-for-4.

Drake’s Shanquan Hemphill played for the first time since Feb. 10, returning from a broken foot.