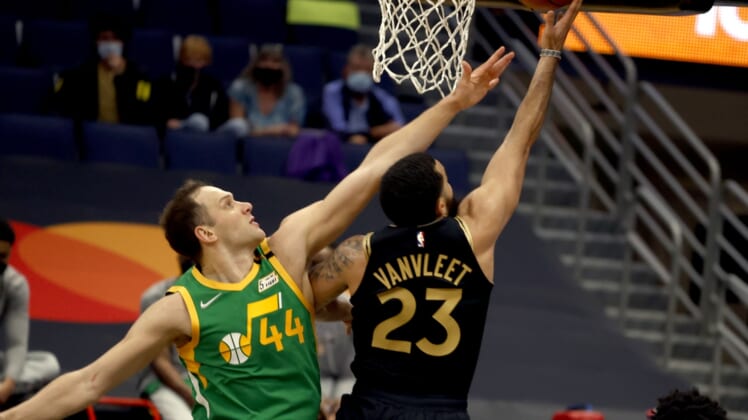 Donovan Mitchell scored 31 points, including a go-ahead pull-up jumper with 29.1 seconds left, to lead the Utah Jazz to a 115-112 victory over the Toronto Raptors on Friday night.

Mitchell went 15-of-16 from the free throw line for the Jazz. He scored all eight points in an 8-0 run that put Utah up 113-110 with 12.4 seconds left. Pascal Siakam barely missed a 3-pointer at the buzzer that would have forced overtime.

Conley returned to action after sitting out against Washington on Friday. It did not help Utah avoid another slow start on offense.

The Jazz shot just 30.4 percent from the field in the first quarter after missing nine of ten shots over a five-minute stretch during the quarter.

Their sluggish shooting opened the door for the Raptors to stake out an 18-12 lead behind an 11-5 run fueled by a pair of 3-pointers from Lowry and one each from Anunoby, and Powell.

The Jazz trailed until Ingles sank back-to-back threes to tie it up at 38-38 in the second quarter. Utah did not go ahead, however, until Mitchell hit three go-ahead free throws and stole the ball on three straight possessions to fuel a 13-2 run that put the Jazz up 55-51.

Boucher bookended a run of baskets on three straight possessions that gave Toronto an 84-82 lead in the fourth quarter.

The Jazz then scored on six consecutive baskets to pull ahead of the Raptors. Conley assisted on three straight baskets to fuel the run, and Gobert finished it off with back-to-back baskets, giving Utah a 94-84 lead.

Toronto surged back ahead late in the fourth quarter. Powell and Lowry drained back-to-back 3-pointers to put the Raptors ahead 110-105.