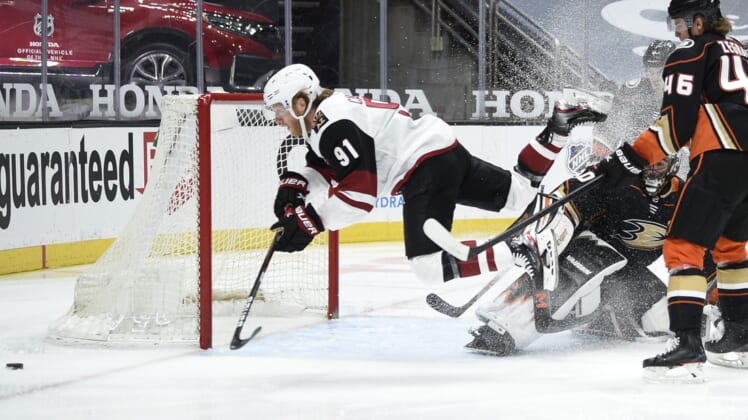 Derick Brassard collected his first career regular-season hat trick and the visiting Arizona Coyotes rode a three-goal first period to a 5-1 victory over the Anaheim Ducks on Saturday.

Jakob Chychrun, who posted a two-point game, and Clayton Keller also scored for the Coyotes, who ended a disappointing road trip by snapping a five-game winless skid. Goaltender Antti Raanta made 27 saves in the win.

Raanta didn’t face a heavy load of shots, but was at his best late in the second period with several saves to keep the Ducks off the board when they had a slim hope for a comeback.

Adam Henrique scored the lone goal for the Ducks, who sit at the bottom of the West Division standings and have just one win in their last six games — an overtime victory over Arizona in the first half of this two-game set.

Ducks goaltender Ryan Miller was the victim of three goals on 14 first-period shots before Anthony Stolarz replaced him and stopped 12 shots in relief.

Brassard, skating in his 883rd career regular-season game, opened the scoring with a deflection goal. He was parked at the doorstep when Chychrun sent a point shot and redirected the puck past Miller.

Chychrun took his turn finding the twine less than three minutes later for his eighth goal of the season. A turnover resulted in him gaining the puck at the point and his long wrist shot somehow eluded the Ducks goalie.

Brassard then found the mark on the power play to make it a 3-0 affair. He provided a nifty deflection of Oliver Ekman-Larsson’s shot-pass with 4:28 left in the opening period.

Brassard completed the hat trick 36 seconds into the second period when he unloaded a short-side slap shot from the left faceoff dot on the first shot Stolarz faced for his seventh goal of the campaign.

Keller became Arizona’s first 10-goal scorer of the season when he buried a shot with 7:43 remaining in regulation to make it 5-0, before Henrique spoiled Raanta’s shutout bid two minutes later.