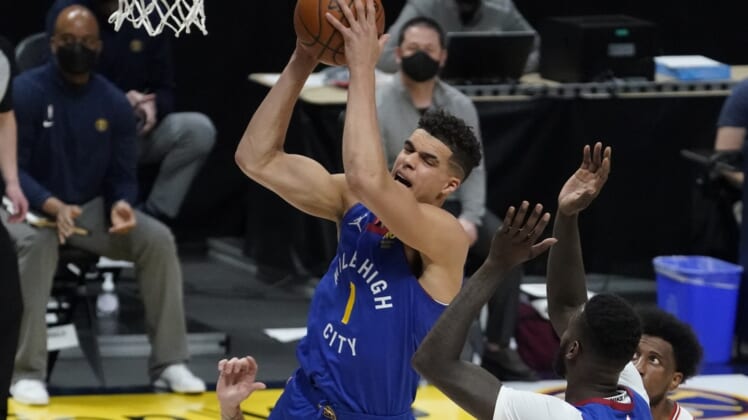 Jamal Murray scored 22 of his 34 points after the third quarter, including a last-second 3-pointer to send the game to overtime, and the host Denver Nuggets rallied to beat the Chicago Bulls 131-127 on Friday night.

Nikola Jokic also had 34 points to go with 15 rebounds and nine assists. Michael Porter Jr. scored 19 points, Will Barton had 16 and JaMychal Green added 10 for the Nuggets.

Chicago led by 14 early in the fourth but the Denver, which trailed for most of the game, rallied.

White was called for a flagrant-1 foul on Michael Porter Jr.’s 3-point attempt and it turned into a four-point trip for Denver. Two turnovers by the Bulls led to a jumper by Jokic and a layup from Murray to make it 103-97 with 6:06 left.

The Nuggets kept coming, and Murray drained a 3-pointer to give the Nuggets a 108-107 lead, their first since early in the game.

Otto Porter Jr. answered with a 3-pointer, and after Denver turned it over, LaVine hit a foul-line jumper to make it 112-108 with 1:14 left. The Nuggets had two chances to get closer but missed both shots, and White hit a layup to make it a six-point lead with 45 seconds left.

Jokic hit a 3-pointer from the top of the circle, and a steal by Facundo Campazzo led to a Murray layup. LaVine hit two free throws to extend the lead to 116-113, but Murray sent it to overtime with a corner 3-pointer with 0.4 seconds left.

Murray’s 3-pointer sparked nine straight points for the Nuggets to start overtime, but the Bulls answered with seven straight to cut it to 125-123 with 1:13 left.

Jokic and LaVine each scored four points to keep it a two-point game with 30 seconds left, and Murray hit a baseline jumper with 10.3 seconds left to seal it.