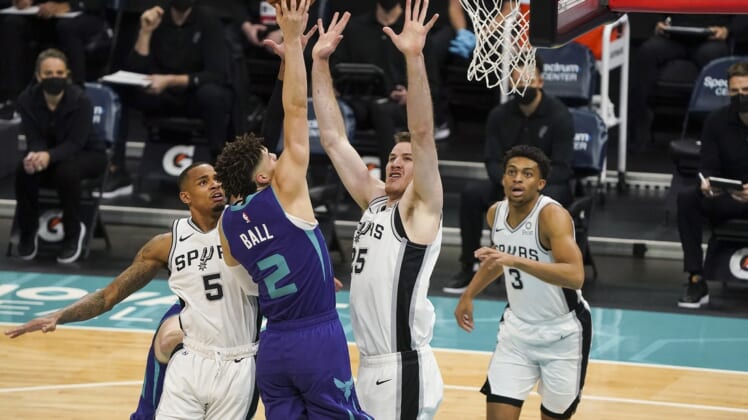 Dejounte Murray scored 26 points and collected 12 rebounds and was at his best in the pivotal fourth quarter to help lead the visiting San Antonio Spurs to a 122-110 win against the Charlotte Hornets on Sunday.

Derrick White posted a season-high 25 points for the Spurs, who have won five of their past six games, including the first two on their seven-game annual Rodeo Road Trip.

The contest was tied heading into the fourth quarter before San Antonio took charge, sweeping to the front for good with an 11-2 run over four minutes that granted it a 103-95 lead with 6:27 to play. White’s jumper capped that surge, and he added five more points over the ensuing minute to help push the advantage to 108-99.

The Spurs then rolled to the finish line, with Murray hitting four free throws in the final 29.5 seconds.

Rozier, who had 41 points in the Hornets’ win over Minnesota on Friday, picked up right where he left off, racking up 16 in the first quarter on Sunday, including the layup with 55.1 seconds to play to give Charlotte a 33-17 lead after one period.

The Spurs pulled even at 53 on Murray’s jumper with 4:13 to play in the second quarter. San Antonio then scored nine of the next 11 points to build its largest advantage of the half, at 62-55, on Johnson’s layup with 1:03 remaining and took a 64-59 lead to the break.

Murray paced the Spurs with 14 points in the first half, with White adding 13. Rozier’s 18 points led Charlotte at halftime and Ball added 14 for the Hornets over the first 24 minutes.