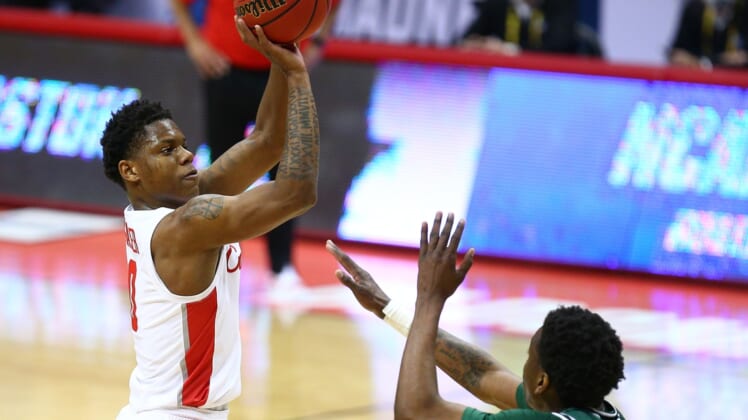 Quentin Grimes scored 18 points and Tramon Mark added 15 as the second-seeded Houston Cougars rolled to an 87-56 victory over 15th-seeded Cleveland State on Friday at Assembly Hall in Bloomington, Ind., in the first round of the NCAA Tournament.

The Cougars (25-3) advanced to play the winner of Clemson-Rutgers on Sunday in the second round of the Midwest Region. They extended their winning streak to eight consecutive games, confirming a reputation of stifling defense and assertive rebounding, particularly on the offensive end.

Houston cruised past the Vikings (19-8) despite losing senior guard DeJon Jarreau to a right hip injury in the first minute of the game. Jarreau, the American Athletic Conference Defensive Player of the Year, did not return and watched the game with heating pads stuffed in his shorts.

The Cougars made due without him. Grimes added four rebounds and four assists to his ledger while drilling four 3-pointers. Mark, pressed into a larger role with Jarreau sidelined, had three steals. Houston received 14 points from guard Marcus Sasser plus a combined 32 points and 13 rebounds from its bigs rotation of Justin Gorham, Fabian White Jr. and Brison Gresham.

Houston posted a 38-24 advantage on the boards with 16 offensive rebounds. That handiwork netted the Cougars 17 additional shot attempts. Their dominance on the glass complemented a defense that allowed just one field goal over the opening 10 minutes of the second half.

The Vikings were competitive early, answering a 9-0 Houston run with a 10-2 spurt that cut the Cougars’ lead to 27-24. D’Moi Hodge drilled a pair of 3-pointers during that rally to keep Cleveland State in range, but Grimes closed the half with a layup for a 37-29 lead at the break.

When Grimes nailed a 3 at the 15:58 mark of the second half, the Cougars led 49-31. Sasser hit a 3 prior to jumpers from Mark and Gorham to ignite the Houston rally, and with the Vikings unable to defend without fouling — Houston was in the bonus by the 12:45 mark — the Cougars kept pouring it on, extending their lead to as many as 37 points in the second half.