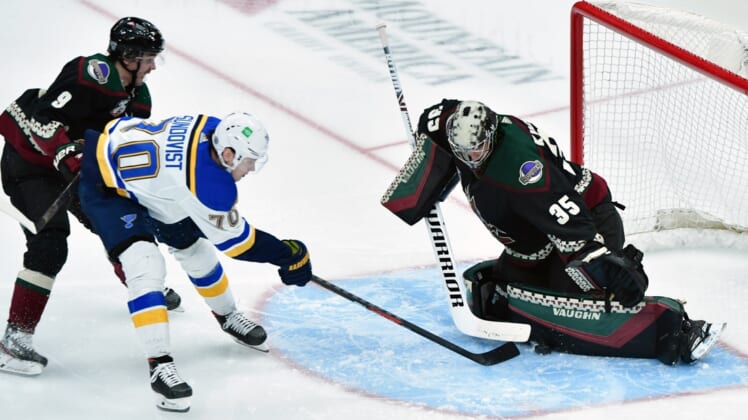 Darcy Kuemper made 24 saves for his 19th career shutout as the Arizona Coyotes blanked the St. Louis Blues 1-0 Monday in Glendale, Ariz.

This was the seventh consecutive game between these teams due to COVID-19 postponements elsewhere. The Coyotes won the series 4-2-1.

Jordan Binnington stopped 18 of 19 shots for the Blues, who may have lost more than the game. Defenseman Torey Krug suffered an upper-body injury and did not return.

The Coyotes had the better scoring chances early on. Nick Schmaltz cut to the net and tried to backhand the puck through Binnington seven minutes into the game.

Later in the first period, Binnington barely thwarted Derick Brassard’s wraparound bid. The puck popped up onto his shoulder, rolled down his body and then sled out of harm’s way.

The first good scoring chance for the Blues came short-handed early in the second period. Oskar Sundqvist broke in on Kuemper from the left wing and tried to stuff the puck through him.

Keller scored 5:21 into the second period by firing a shot from the left circle off Binnington’s glove and into the net.

Blues defenseman Vince Dunn nearly tied the game, but his wrist shot from the center post clanged off the left post.

Kuemper stopped Ivan Barbashev’s open shot from the slot with four minutes left in the period to protect the lead.

Then Coyotes winger Conor Garland cruised in from the right wing and rang a shot off the left post as the game remained 1-0.

After killing off a penalty midway through the third period, the Blues had another chance to tie the game. But Kuemper denied Dunn’s shot moving in through the left circle.

The Blues pulled Binnington for an extra attacker in the final minute but failed to put a shot on goal.