RECAP: Danny Green scores 28 to carry the Philadephia 76ers past the Lakers 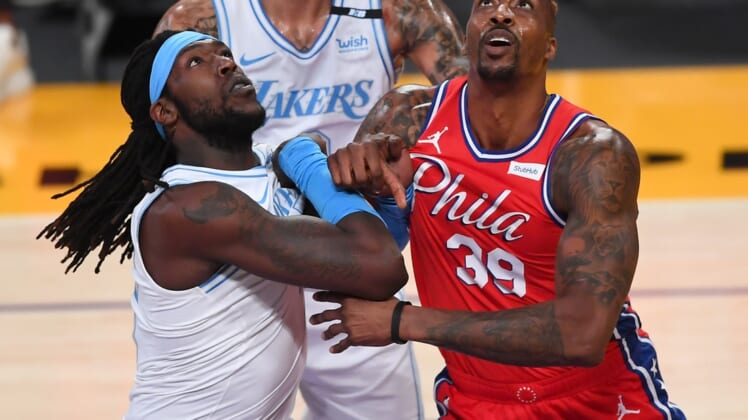 Danny Green shot 8-for-12 from 3-point range and scored 28 points to help the visiting Philadelphia 76ers to a 109-101 win against the Los Angeles Lakers on Thursday night.

Green was awarded the NBA championship ring that he won with the Lakers last season before the game.

Seth Curry returned after missing the past three games with a sprained left ankle and scored 19 points, and Tobias Harris finished with 17 points for Philadelphia, which has won 10 of 11 to remain atop the Eastern Conference standings.

Kyle Kuzma had 25 points and nine rebounds, Dennis Schroder finished with 20 points and 11 assists, and Montrezl Harrell scored 20 off the bench for the Lakers, who have lost four in a row to match their longest losing streak of the season.

The Lakers continued to be without their top two scorers and rebounders.

LeBron James missed his third straight game with a high ankle sprain, and Anthony Davis has been sidelined since mid-February with a calf strain.

The 76ers led by 18 at the start of the fourth quarter, but the Lakers chipped away and cut the deficit to single digits with 5:06 left.

Green, who the Lakers traded in November to Oklahoma City for Schroder, gave Philadelphia its first double-digit lead when he sank a 3-pointer to extend the lead to 68-58 with 8:26 left in the third quarter.

The 76ers continued to add to their lead in the third quarter, expanding it to 18 points entering the fourth.

The other center on the roster, Dwight Howard, was ejected at the start of the second quarter after receiving back-to-back technical fouls. Howard was also awarded the NBA championship ring he won with the Lakers last season.