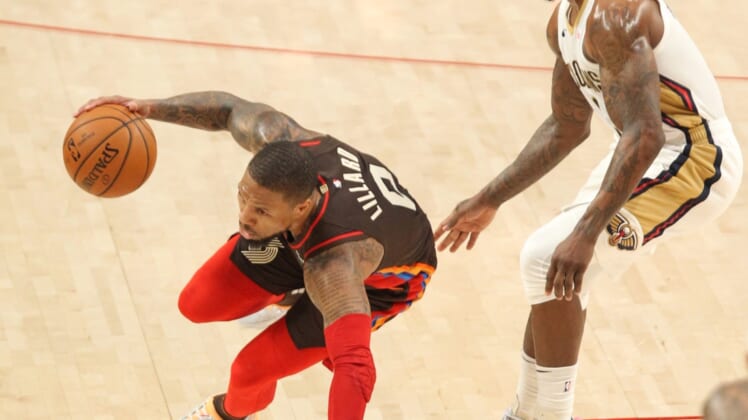 Zion Williamson had 26 points and 10 rebounds, Brandon Ingram scored 19 and Lonzo Ball put up 15 to lead the Pelicans.

The Blazers led by nine points at halftime, but Eric Bledsoe scored five points to help the Pelicans close within 61-55 midway through the third quarter.

Williamson scored six points as New Orleans pulled within 77-70 at the end of the third quarter.

Covington and McCollum made consecutive 3-pointers to start the fourth-quarter scoring and enable the Blazers to match their biggest lead with an 83-70 edge.

Jaxson Hayes’ layup gave the Pelicans their first points of the quarter, but Anthony answered with a 3-pointer for an 86-72 advantage.

Covington and Derrick Jones Jr. made 3-pointers to give Portland a 94-85 lead with two minutes left.

Ingram sank his first four shots and scored 10 points as New Orleans took a 12-8 lead before Lillard took over.

McCollum scored eight points as the Blazers extended the lead to 46-33 midway through the second quarter.

Lillard ended a nearly four-minute field-goal drought with a 3-pointer as the Blazers took a 57-48 halftime lead.