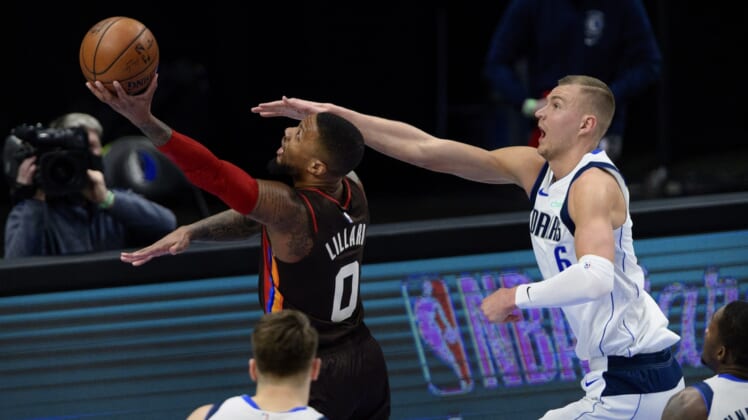 Damian Lillard scored 34 points, dished 11 assists, and made the decisive 3-pointer as the Portland Trail Blazers weathered 44 points from Luka Doncic to beat the host Dallas Mavericks 121-118 on Sunday.

Portland took a 13-point lead with 6:50 left when Enes Kanter scored two of his 14 points, but a scoring drought of more than five minutes resulted in a 12-0 Mavericks’ run.

Dorian Finney-Smith knocked down a 3-pointer on one of Doncic’s nine assists with 49.5 seconds remaining, forcing a tie at 116. Finney-Smith finished with 14 points.

His basket set the stage for Lillard’s go-ahead 3-pointer, a top-of-the-key step-back in isolation with Finney-Smith defending with 32.8 seconds left.

Doncic responded with a quick dunk, but Carmelo Anthony beat Doncic on the other end to draw out Kristaps Porzingis. Anthony fired a no-look pass to Derrick Jones Jr. for an uncontested layup and the game’s final points.

Doncic got a wide-open look at a would-be, game-tying 3-pointer off of a sideline inbounds play, but the shot rimmed off.

The loss snapped a four-game winning streak for the Mavericks, while extending the Trail Blazers’ own streak to four games. The win kicks off a swing of three consecutive road games, and six of seven away from home for Portland.

Porzingis scored 18 points for Dallas and matched Kanter’s game-high with eight rebounds. One game from removed from hitting a career-high eight 3-pointers, however, Porzingis went 0-of-3 from long range.