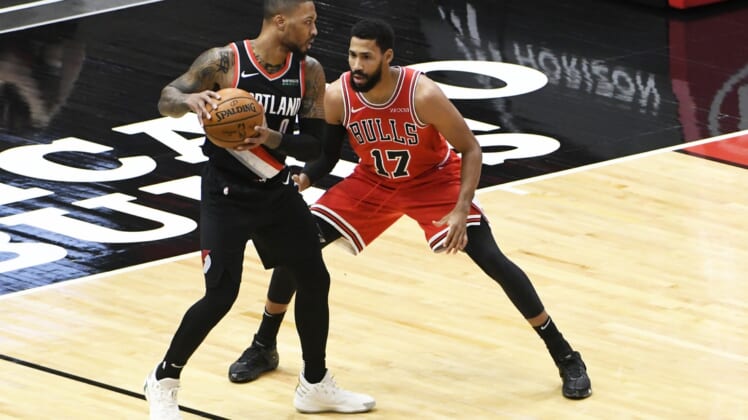 Damian Lillard made a 3-pointer as time expired to give the Portland Trail Blazers a 123-122 win over the host Chicago Bulls on Saturday night.

Teammates mobbed Lillard after his step-back shot over the outstretched arms of Bulls forward Lauri Markkanen. Lillard finished with 44 points on 15-for-26 shooting, including 8-for-17 from beyond the arc.

Enes Kanter scored 22 points and grabbed 11 rebounds for Portland, which snapped a two-game skid and avenged a loss against the Bulls earlier in the season. Gary Trent Jr. finished with 18 points for the Blazers.

The Bulls led 122-117 with 11.5 seconds left after a pair of free throws by Coby White. Lillard trimmed the deficit to 122-120 with 8.9 seconds to go, and after a turnover by LaVine, Lillard connected again for the winning shot.

LaVine put his head down and briskly walked toward the Bulls’ locker room as the Blazers celebrated.

Chicago went on an 11-2 run in the fourth quarter to take a 105-101 lead with 7:29 to play. LaVine hit a step-back jumper to punctuate the run, which also included 3-pointers by Garrett Temple and Tomas Satoransky.

The Blazers entered the fourth quarter with a 93-86 lead. A 3-pointer by Trent put Portland on top by 18 points with 4:56 left in the third quarter, but Chicago responded with a 16-5 run to finish the period.

Portland established a 64-53 lead at the half.

The Bulls grabbed an eight-point advantage early in the second pointer when a 3-pointer by LaVine made it 40-32. The basket marked the second 3-pointer in 35 seconds for LaVine, the Bulls’ leading scorer on the season.

The Blazers regrouped to take command before intermission. Portland trailed 44-36 when it went on a 28-6 run, punctuated by a driving layup by Lillard that put the Blazers on top 64-50 in the final minute of the first half.

White knocked down a 3-pointer with 23.7 seconds left to cut the deficit to 11 before the break.