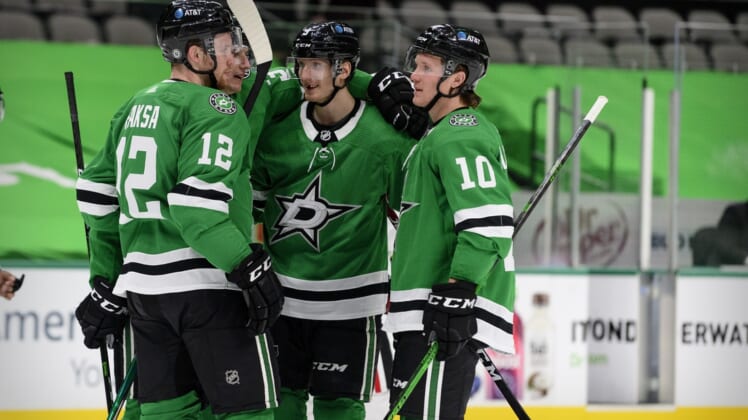 Joel Kiviranta and Roope Hintz each had a goal and an assist and Jason Robertson tallied four assists to boost the host Dallas Stars to a 6-1 rout of the Chicago Blackhawks on Tuesday.

Stars goaltender Anton Khudobin stopped 21 shots as Dallas outshot Chicago 37-22 to improve to 2-0-1 in three past games on the heels of a four-game losing streak.

Dallas never trailed and grabbed the advantage early, with Kiviranta opening the scoring at 1:40 of the first period. Jamie Oleksiak made it 2-0 Stars with less than five minutes remaining in the period.

It was only the beginning of a long night for Blackhawks goalie Malcolm Subban, who gave up six goals on 37 shots. Chicago has yielded 12 goals in the past two games.

Mattias Janmark, who spent his first four NHL seasons with the Stars before signing with the Blackhawks in October, scored against his former team at 1:43 of the second period to cut the deficit to 2-1, but the visitors came no closer.

John Klingberg scored on a power-play goal at 7:25 of the second to spark a run of three successive Dallas goals in a four-minute span. The surge included a breakaway goal from Joe Pavelski and a tally from the high slot off the stick of Esa Lindell.

Veteran forward Patrick Kane became the seventh player in Blackhawks history to skate in his 1,000th career game, a group that includes teammate Duncan Keith as well as Brent Seabrook, who retired last week. Stan Mikita is the all-time franchise leader with 1,396 games.

Kane, who tallied his 400th career goal on Feb. 28, nearly added a goal Tuesday, but Khudobin made a sliding stop on a one-timer in front of the net with 4:25 to go in the second.

Robertson notched the first four-point game of his career. His final assist came as Hintz capped the scoring by batting a deflected puck out of midair and past Subban at 6:46 of the third.

Chicago, which has lost three of four (1-2-1), will aim to regroup when the teams close a two-game series on Thursday in Dallas.