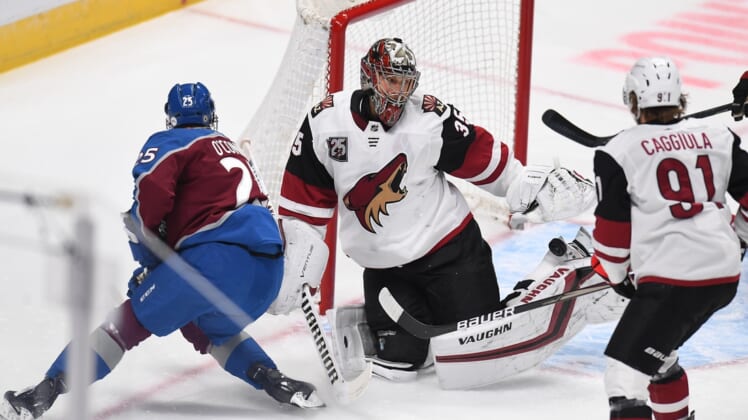 Antti Raanta stopped all 16 shots he faced in relief of the injured Darcy Kuemper, and Derick Brassard, Jakob Chychrun and Johan Larsson scored goals as the Arizona Coyotes beat the Colorado Avalanche 3-2 on Monday night in Denver.

Oliver Ekman-Larsson and Clayton Keller had two assists each for the Coyotes, who have won three of their past four games.

Valeri Nichushkin and Andre Burakovsky scored and Philipp Grubauer had 11 saves for Colorado.

Kuemper left the game early in the third period after alerting an official that he was hurt. An Arizona trainer came out and talked to Kuemper, and the goalie soon skated off.

Kuemper, who missed four games with a lower-body injury before returning Saturday, made 17 saves Monday.

Avalanche center Nathan MacKinnon missed his third straight game with what the team said was an upper-body injury. MacKinnon was hit in the head at San Jose on Wednesday.

The Coyotes got their first goal on the power play. Brassard took a pass at the right circle and ripped a shot between Grubauer’s legs at 4:54 of the first period. It was his fourth goal of the season.

Arizona made it 2-0 later in the first period when Chychrun took a feed from Keller at the top of the zone, and his blast beat Grubauer high for his seventh goal at 15:17.

It came on the Coyotes’ fifth shot of the game.

The score stayed 2-0 until the Avalanche responded midway through the second period. Nazem Kadri fed Nichushkin in the slot, and Nichushkin’s quick shot beat Kuemper at 9:31. It was the fifth of the season for Nichushkin and his third in the past three games.

Colorado tied it up when Burakovsky got a pass from Samuel Girard, skated into the left circle and scored on a wrister at 14:52 of the second on a power play. It was his fifth of the season.

Arizona, despite not having a shot on goal for nearly 20 minutes, took the lead again when Larsson tipped in a shot from the point at 4:06 of the third. It was his fourth of the season.