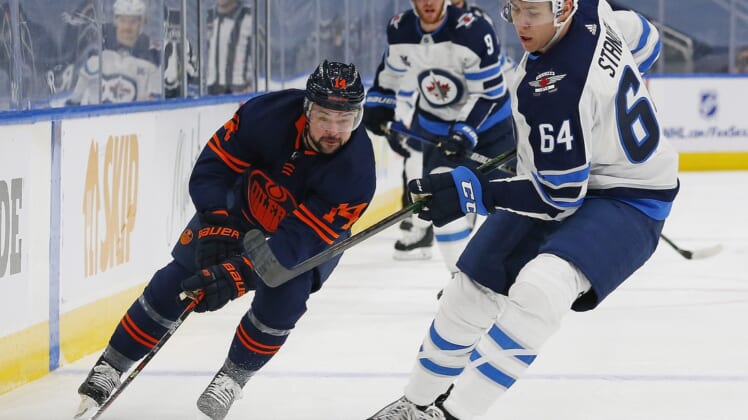 Connor McDavid scored both goals to lead the host Edmonton Oilers to a 2-1 victory over the Winnipeg Jets on Thursday, a win that moves them into a tie with the Toronto Maple Leafs for the top spot in the North Division.

Tyson Barrie, who leads all NHL defensemen with 30 points, collected a pair of assists and goaltender Mikko Koskinen made 24 saves. Barrie has recorded six assists in the last two nights and is the fastest Oilers defenseman to 30 points (33 games) since Paul Coffey needed 22 games to get there in the 1986-87 season.

Mathieu Perreault scored for the Jets, who will look for revenge when they meet the Oilers again Saturday night. Laurent Brossoit stopped 19 shots for Winnipeg, which is third in the division, two points back behind Maple Leafs and Oilers.

After a scoreless, tight-checking first period — shots were 6-4 for Winnipeg –McDavid, the league’s leading point producer with 58, extended his point streak to eight games when he opened the scoring early in the middle frame.

Upon coming off the bench, McDavid gained the puck at the hash marks along the right boards, took a couple of strides and ripped a shot off the far post and into the net at the 3:53 mark.

Perreault evened the count past the game’s midway point. Nate Thompson sent a shot from the wing while his team enjoyed a rush up ice, and Perreault deflected the puck into the net at the 12:43 mark.

McDavid replied 38 seconds later, however, with his second of the game to reach the 20-goal mark. While on a two-on-one rush, he elected to shoot and found the mark inside the far post. McDavid, with six goals and 18 points in his current scoring spree, is the fastest Oilers player to score 20 goals in a season since Mark Messier also needed 33 games to reach that mark in 1989-90.

The Oilers are known for their high-octane attack and lead the league in goals, but concentrated on shutting down the Jets the rest of the way. Winnipeg needed nearly eight minutes to register a third-period shot and managed only seven pucks on net in the final frame while trying to find the equalizer.