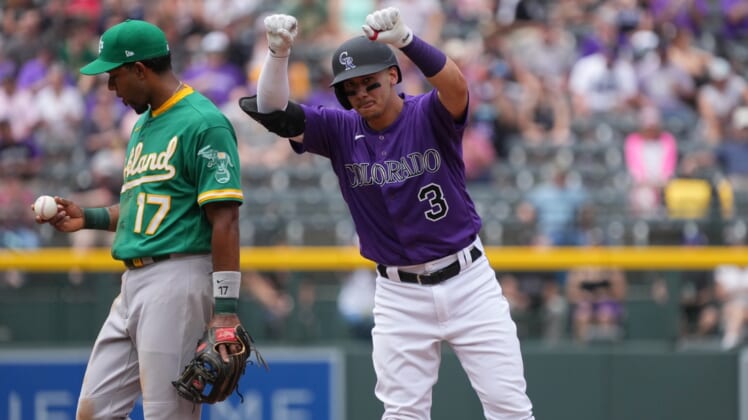 German Marquez tossed six strong innings as the Colorado Rockies beat the visiting Oakland Athletics 3-1 to salvage the finale of the three-game series on Sunday.

Elvis Andrus had two hits for the Athletics, whose four-game winning streak came to an end.

Marquez (4-5) allowed one run on four hits and one walk with six strikeouts. The right-hander has a 1.04 ERA over his last four starts covering 26 innings.

Daniel Bard closed out the game with two scoreless innings for his seventh save in 10 opportunities.

Colorado avoided its sixth sweep of the season and won for the fifth time in its last seven games.

The Rockies took an early lead in the third against James Kaprielian (2-1). Dom Nunez doubled with one out and scored on Raimel Tapia’s two-out single.

Tapia is 12-for-24 with six doubles and five RBIs during his five-game hitting streak.

Colorado loaded the bases with no outs in the fourth against Kaprielian and moved ahead 2-0 when Charlie Blackmon scored on Brendan Rodgers’ sacrifice fly.

Oakland escaped further damage when Marquez lined out to center to end the inning, stranding the bases loaded.

Kaprielian allowed two runs and struck out six over five innings in his fifth career start.

Oakland got on the board in the sixth. Tony Kemp extended his hitting streak to eight games with a leadoff double and scored on Sean Murphy’s one-out double off the left-field wall.

The Athletics threatened with two runners on and one out in the seventh, but Mychal Givens struck out Mark Canha and Kemp to end the inning.

Colorado added an insurance run in the ninth when Nunez’s sacrifice fly for the second out scored Ryan McMahon, who singled to begin the inning.

Seth Brown snapped a 0-for-24 skid with a leadoff single in the bottom of the ninth, but Bard retired the next three batters in order to end the game.

Oakland, which averaged 8.3 runs during its four-game winning streak, struck out 11 times and went 2-for-13 with runners in scoring position.