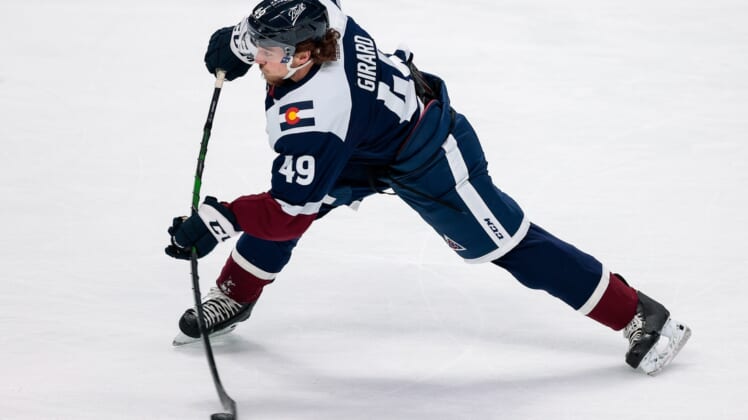 Mikko Rantanen had two goals and two assists, Nathan MacKinnon and Gabriel Landeskog had a goal and two assists each, and the Colorado Avalanche beat the Minnesota Wild 5-1 on Thursday night in Denver.

Cam Talbot stopped 50 shots and Victor Rask had a goal for Minnesota, which had its five-game winning streak snapped. The 55 shots allowed was one shy of the franchise road record, and the 50 saves were a regular-season career high for Talbot.

Minnesota defenseman Matt Dumba left the game in the second period after losing and edge and sliding into the boards skate-first. He stayed down before being helped to the bench by a team trainer and another Minnesota player without putting weight on his right leg.

He did not return.

MacKinnon opened the scoring at 11:10 of the first period. He stickhandled past Dumba at the blue line before his pass attempt to Rantanen deflected off Dumba’s stick and through Talbot’s pads. It was MacKinnon’s ninth of the season.

The Avalanche added another one in the final minute of the first when Samuel Girard took a drop pass from MacKinnon and then fed Rantanen in front of the net. Rantanen deflected it under the crossbar at 19:02.

The Wild finally broke through on a power play midway through the second period. Rask brought the puck into the Avalanche zone, skated between two defenders and beat Grubauer with a snap shot from the left circle at 8:41. The tally was his seventh of the season.

Landeskog restored the two-goal lead when his centering pass was deflected into the crease and he tipped it in as he was being knocked down at 15:07 of the second. It was his eighth of the season.

Donskoi made it a three-goal lead when he scored on a breakaway at 1:57 of the third period, his eighth of the season. Rantanen made it 5-1 with his second of the game and 16th of the season at 6:30.